Weekday baseball in Britain in the 1970s

This week the London Mets announced a new midweek baseball league for 2011. The initial iteration of the story supplied by the club suggested it might be the first non-weekend experiment in British baseball history, but — as much as I support this innovative venture — I felt the need to point out that the idea was not truly a new one. So the story now mentions a weekday league in 1976. There was certainly weekday baseball in Britain’s earlier history, and the man behind the 1976 experiment — Jeff Archer — has kindly supplied details of a variety of other successes in getting baseball going during the week in the late 1970s.

Jeff’s note to me includes encouragement of the Mets’ current experiment and even has an idea that could be tried if the current umpiring stalemate in the NBL becomes a long-term phenomenon.

When I moved to England in 1975 and began to play with and coach the Crawley Giants, I noticed the exclusivity of weekend baseball. I asked several people why baseball wasnâ€™t played during the week and I received the same answer: â€œBecause weâ€™ve never done it.â€ Sometimes, I worded the question a little different and asked why all games were played on Sunday. The response was: â€œBecause weâ€™ve always done it that way.â€

In 1976, I broke the monopoly that weekend baseball had held on the sport in Britain and created the London Twilight League. We played two nights a week at Rosslyn Park Rugby Club in Barnes. [For a history of this on BaseballGB, click here].

That was only the start of weekday baseball in the London area. At the latter part of the 1977 season, when the groundskeeper at Wasps Rugby Club, our home venue for an international schedule, deemed the field torn up too much by baseball, we moved to the baseball field at West Ruislip. That became home for all my baseball activities from 1977 until September 1980 when I moved to The Netherlands to coach in that countryâ€™s top baseball league.

By the beginning of the 1978 season, we had many kids in a program at West Ruislip. The league played its games on Saturdays and Sundays, as normal with British baseball, but we also played on Wednesday evenings. These sessions were different from the regular league games. They were not obligatory, but about 20-30 kids showed up each Wednesday evening to participate. I called Wednesday â€œthe experimental night.â€ I picked two teams at random, ignoring the regular rosters the youngsters were on during league games. Hereâ€™s the big difference. Each team had a kid managing it; the scorekeepers were kids as well as the umpires. Each week, everyone rotated. From this experiment, we produced excellent umpires and scorekeepers. At any one time during the regular season, I could holler, â€œWho wants to keep score this game?â€ and about a half dozen kids would volunteer. They even went further as about five or six youngsters became competent umpires. In fact, in 1979, I formed the London Baseball League, a circuit that consisted to teams that included some of the graduates of the youth program as well as a few old-timers who came out of retirement to have a little fun. The caliber of the league wasnâ€™t great, but it served its purpose. The difference between this league and possibly any other in the world was that it was an adult league and the umpiring staff consisted of 13-15 year old kids. The chief umpire was a 13-year-old girl. They were excellent and a little worried at first to be umpiring for adults, but that soon wore off. I would have put them up against any adult umpiring staff in Britain.

That wasnâ€™t the only weekday baseball activity. In1978, the Harrow Leisure Centre as well as the Harlington Sports Centre included baseball in their summer programs. I conducted all the sessions myself with no monetary compensation. The deal was that they would offer baseball but did not have a budget for its promotion. Some days, at Harrow, 50 kids showed up. In 1979, the weekday baseball programs increased, with Harlington offering summer baseball sessions at two venues. In 1980, the Borough of Hillindon recognized baseball as a summer sport and I received a small grant to be able to pay expenses to two American instructors. In that summer, baseball was being played at about eight sports centres or playgrounds in the Borough of Hillindon. Hundreds of kids participated. 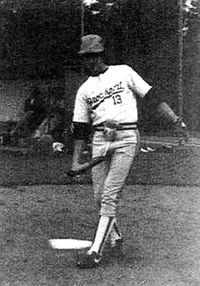 Scott Donop, one of the Brockport players, holding a bat like only a man can.

The biggest highlight of weekday baseball came in 1979. The State University of New York at Brockport visited Britain and I arranged a schedule for them to visit Nottingham and Liverpool. However, they began their tour in northwest London. I obtained housing for them from the families of the kids playing in the league. But, I put the Brockport players with the families of the kids by the playersâ€™ positions. In other words, the Brockport first baseman stayed at the house of a youngster who played first base, etc. The kids received a hands-on education. On a Tuesday evening, the Brockport team put on an unusual and unique training session for the kids at West Ruislip. Each player took his position and held court for the kids at the position. Then, the kids could move on to another position. It was like having a baseball supermarket.

The following evening saw the best baseball that had been played in London in years. Instead of having Brockport play a British team that would have had the merde kicked out of it, I had them split the squad into two equally-talented rosters. The baseball game was close and all the kids were rooting for the Brockport players that stayed at the appropriate houses. We filled the stands and fans were standing on the grass outside the first and third base lines. There were a few hundred spectators.

In addition to the programs mentioned, there was the occasional weekday playoff game at seasonâ€™s end between the Ruislip kids and those from Enfield, Ashford and Wokingham.

For three years, weekday baseball was played in the London area. It was successful and was a training ground for kids to learn how to play, score and umpire baseball. Recently, I received an e-mail from a player in the West Ruislip program. Evidently, he played in adult British leagues for a while after I left Britain. Then, he became an umpire. He thanked me for instilling baseball knowledge into the kids who played at West Ruislip. He told me, and Iâ€™m paraphrasing, â€œIâ€™ll always remember you getting on us to get the bats off the field. When I umpired after my playing days, I would constantly stop the game, take my mask off and holler, â€˜Get those bats off the field.â€™ Or â€˜Put that cigarette out.â€™â€ Messages like this from days gone by are more important to me than those heralding my coaching wins. I had many coaching victories over the years, but I also coached in many a game when my team came out on the bottom. Having taught someone a lasting lesson on baseball is more important than the fleeting results of baseball games.

I think weekday baseball should be promoted in Britain. Get rid of the stigma that baseball is only a weekend pursuit. Iâ€™m sure that football players in Britain, no matter if youngsters, amateur or professional adults, donâ€™t hone their skills by playing only on Sunday.

Performance of the Week: Week Seven

I played Little League ball at W. Ruislip in the mid-70s under a Mr. Kenny. Burgers & grape Fanta were a treat for this expat who listened to Atlanta Braves games on U.S. Forces radio…

I played for “Spirit of 76” team in 1976 along with Sam Doswell. Had pretty “colorful” uniforms. Jeff Archer organized and coached.
Enjoyed that time and saw some pretty memorable things. One field was limed with every single line, including the measurement
dimensional lines from the Baseball “field manual”. Saw two pitchers break their arms on the same day while pitching.