The Book of Baseball by Derek Brandon and Jim Marooney

A book review by Jamie Crompton 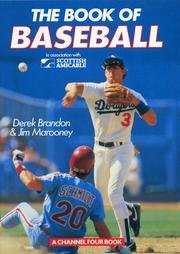 I can’t quite remember which came first: reading The Book of Baseball or collecting my first set of Topps baseball cards. Either way, the book played a fundamental role in first introducing me to the game more than a quarter of a century ago. Despite the cost of Â£7.95, which was quite a lot of pocket money in those days, it proved to be very good value. When, many years later, I became a serious fan of the sport, the basics that I had picked up from this publication served me well. All in all, I have fond memories of reading The Book of Baseball.

Published in 1987, the book positioned itself as â€œthe first major British book about baseballâ€ and was tied in to Channel 4’s televised coverage of MLB. Its authors were Derek Brandon, whose Cheerleader Productions company had already brought American football coverage to the UK and was now doing the same with baseball, and Jim Marooney, Cheerleader’s New York-based producer, formerly of NBC. The front cover features an action shot from a Dodgersâ€“Phillies game; Mike Schmidt is seen sliding towards second base as Dodgers infielder Steve Sax attempts to throw to first.

The book’s foreword is by Martin Tyler, who presented Channel 4’s baseball coverage in the mid-1980s and has since become the lead football commentator at Sky Sports. It made me wonder, given their coverage of the NFL and NBA, whether Sky will take on baseball at some point. Accompanying Tyler’s intro appears a picture of the ticker tape parade that followed the New York Mets’ 1986 World Series win; I pity the poor guy who had to clean all of that up!

Delving into the first few pages, we are introduced to the fundamentals of baseball, including the strike zone, fielding positions and how runs are scored. We are also informed of the roles of umpires and coaches. The next part of the book explains the art of pitching and there are some nice illustrations of some of the common grips and pitch trajectories. The section on batting touches on some of the strategy that goes into the batting order and describes what designated hitters and pinch hitters do. We are then told something of how the bats and balls are made.

The section on fielding lets us know that until 1954, fielders dropped their gloves where they stood at the end of an inning and left them out on the field until the next inning. This would have created dangerous obstacles for the opposing fielders, so it is not surprising that this practice was stopped. The book rightly stresses the importance of the catcher as well as outlining the ways in which runners can be put out. As you might expect, the history and structure of the game is also laid out, including details of the leagues, divisions, play-offs and World Series.

From a British perspective, one of the most interesting parts of the book is entitled â€œBaseball & Channel 4â€, which tells us a little about the televised MLB coverage in the United Kingdom at that time. Screening baseball seemed like a logical move, given the popularity of the NFL over here. Three World Series were covered in all, but due to haphazard scheduling by Channel 4, it proved impossible to maintain even modest ratings and the programming was eventually axed. The coverage was somewhat limited by today’s standards (10 hours were given to the 1986 postseason and World Series, for example) and it is amazing to think how far we have come since then. ESPN America now shows several live games per week, including every postseason game, and if that isn’t enough, MLB.TV has every single game live and on demand. You have to start somewhere though, and we should be thankful to those that pioneered the broadcasting of baseball in the UK.

The second half of the book provides a profile of every MLB team, including history and roster, basic field dimensions of each stadium and various interesting facts. We find out that Wrigley Field is the only major league park without floodlights. We learn that the Braves, Blue Jays and Rangers have never been to the World Series. We also discover that Comiskey Park is not only the oldest ballpark in the U.S., but also has the prettiest ladies’ loos in Major League Baseball. That these have all been overtaken by history makes them no less interesting to read about.

Much else has changed since the book was published. The majority of MLB teams have moved to new stadiums, four new franchises have been added and one team has both a new city and a new identity. Divisions have been realigned, the postseason has been expanded (twice), an entire postseason was lost due to a strike by players and the â€œsteroid eraâ€ cast a shadow over the game. The book’s sponsor, Scottish Amicable, was acquired by Prudential. The list of contacts for British baseball has become outdated and Channel 4 has not broadcast baseball for many years. Saddest of all is that one of the co-authors, Jim Marooney, has since passed away.

Nevertheless, the book is much more than just a historical artefact, as the sections such as â€œHow to read a boxscoreâ€ and the helpful glossary of terms would still be of use to anyone trying to learn about the game today.

A minor criticism is that there are a few aspects of the game that were overlooked. It would have been interesting to read a little more about baseball around the world, particularly Japan and Central/South America, though given the book’s tie-in to MLB coverage, the focus here is understandable. There is no mention of the women’s game, and topics such as the Negro leagues and integration are covered only briefly.

Overall however, this is an excellent book. The authors succeed in explaining the game to a British audience, imparting a great deal of relevant information without ever patronising the reader. There is a good balance between factual, descriptive writing and the various anecdotes that give a flavour of baseball culture. The game of cricket is sometimes used as a natural reference point, which is useful for Brits experiencing the game for the first time. The book also contains many colour photos among its 128 pages. This excerpt from the summary on the back cover seems to capture the essence of baseball very nicely:

â€œThe game has a natural pace that ebbs and flows, keeping the audience riveted to pitcher and batter, eyes peeled for the winning hit. It is both subtle â€“ like cricket â€“ and immensely dynamic, liable to explode at any minute with a surge of activity and the support of a roaring crowd.â€

The Book of Baseball went out of print within about a month of its publication. For those interested in buying the book, Derek Brandon still has a few unopened copies available at the original cover price of Â£7.95, plus P&P.Â  You can contact Derek via his website, Cheerleader Productions, at www.cheerleaderproductions.com. Alternatively, you could try auction sites or second hand book shops.

Haarlem Baseball Week, 1961: an early British foray onto the Continent

That’s a great review of a book that provides a wonderful snapshot into the life of an MLB fan in Blighty back in the late 1980s.

In the build up to the Manchester football derby, Sky Sports was running an advert in which Tyler noted something along the lines of ‘only the Premier League provides endings like this’. When I first heard it, my reaction was that MLB has produced some great endings to match anything the Premier League has done (David Freese’s homer in the 2011 World Series being a recent example that springs to mind) and I thought, ‘shame Tyler doesn’t follow MLB too’. So, it’s a funny coincidence that you mention Martin Tyler’s Intro!

[…] in 1987 about America’s game, aka, The Book of Baseball by Derek Brandon and Jim Marooney, as reviewed by the BaseballGB blog. Upshot: “Overall…, this is an excellent book. The authors succeed in explaining the […]

[…] “The Book of Baseball” by Derek Brandon and Jim Marooney […]