One from the Present: Altercations 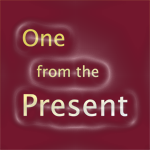 So it all kicked off on Sunday at Hemel, in the double-header between the Harlow Nationals and the Herts Falcos, but that was no surprise.

The Nationals were formed in 2011 when a core cluster of Falcons decided to break off from the cast. While I can’t find fault in the professional way in which the reigning champions were set up — particularly by the standards of an amateur sport — some unhappiness was almost inevitable.

Augmenting the rivalry, in terms of both personnel and competitiveness, is the fact that the Herts team has now added major players from the old Richmond squad, who might still feelÂ aggrievedÂ at their semi-final championship loss to Harlow last season.

All that was needed to spark a bench clearance yesterday was something as seemingly minor — to those not in the know about baseball’s deep-running rituals — as “pimping” a home run; that being the modern parlance for showboating.

I arrived at the ground long after the altercation in game one, and by this point the flared tempers had cooled to tepid. The breadth of the range of descriptions I received suggested that there was some exaggeration or playing down of the facts (or probably a scattering of both), but the fact that all the descriptions were volunteered rather than elicited implies that this was not trivial. 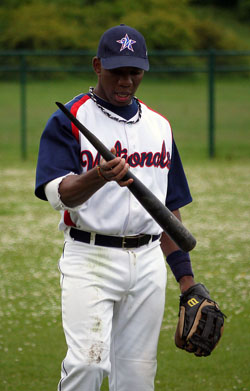 After the contest, cool-box beer and some Dominican strength rum and colas helped return the animosityÂ to the right-and-proper level of playful banter. Among the topics up for discussion were whether Darrin Ward would have been out if Maikel Azcuy had caught the broken bat barrel that pirouetted towards him at shortstop in game two (see right). I felt happily reassured that the events that had unfolded at Grovehill were merely a manifestationÂ of baseball ritual rather than evidence of the game being polluted by the thuggishness that clings to some sports in Britain. And how pleasant itÂ was to witness alcohol reducing friction — so often, at least on the average British high street on a Friday or Saturday night, it is the sole cause of it.

Thus reassured, I grew excited that on the Bank Holiday Monday at the end of August I might see these two teams lock horns in the national final. But for that clash to materialise, the Nationals might need to get their pitching staff fit, otherwise they will not have the depth to come in to the championships with short odds.

Of course, the Southampton Mustangs will be working off a different script. They have been building a head of steam on the south coast for the past few years and last season were only denied a first championship final appearance by a ninth inning pitching capitulation (alternatively described as a heroic rally, from a different viewpoint, specifically that of their opponents in the game, the Lakenheath Diamondbacks).

The London Mets should not be written off, as they boast some flashy talent on their roster (and so they should, with their enviable catchment area). The Essex Arrows have showed more fight than ever before this year, despite a few departures over the winter. And the Diamondbacks might still like to think they have a chance of at least returning to the final-four stage. There certainly is the baseball quality lurking somewhere on the bases in Norfolk to make that possible.

So the above is not exactly gutsy journalism, you might argue, as all I’ve done above is rule out two of the eight teams, who between them have a 1-and-23 record. But maybe I’m just avoiding any altercations.

FeaturedOne from the Present
2 comments
0
FacebookTwitterPinterestEmail

[…] Baseballgb.co.uk writer and Project COBB founder, Joe Gray, who was at the game reported on the incident in an article which enhances the post-match analysis so hertsbaseball.com was keen to post a link to the article (Click to view). […]

[…] noted by Joe Gray earlier this week, there nearly was an actual clash between the two NBL sides when Nationals […]