Thank You For The A’s: So Long Sonny

The baseball gods can be unkind at times, but on Monday night (or early hours of Tuesday morning for us) it felt like they took pity on us A’s fans.

If ever we needed a win against the Giants – including a Marcus Semien grand slam – to boost the spirits, it was yesterday.

We all knew Sonny Gray was on his way and we all knew that it was likely to end with him in a photo smiling with pinstripes on and an interlocking NY on his cap.

That doesn’t making it any easier though.

Sonny was ours, simple as that. In my final act of getting nothing done yesterday evening, I hunted out one of my old notebooks and found a page from 2011 when I first watched him pitch. The A’s had recently used their first round draft pick to sign him and he happened to be pitching for Vanderbilt in the College World Series in a game being shown on ESPN America (as it was known then).

He looked impressive, especially with his curveball, and but even then I knew not to get too attached. There were no guarantees he would make the Majors, at least not with the A’s anyway. I remember reading about Andre Ethier at the end of the 2005 season and being excited at the prospect of him making our Major League team in 2006. He never did because we traded him to the Dodgers in December for Milton Bradley.

There’s a name to avoid thinking of too much.

Not keeping Ethier, chucking away Carlos Gonzalez in the Matt Holliday deal, trading away Addison Russell in 2014: all these thoughts kept swimming around my head last night.

However, whilst the A’s seem to go through this more than most, it happens to every team and every fan. We all have tales of prospects who made it elsewhere, or favourite players that were traded away. When it comes down to it, all the transactions don’t really add up to much, despite the instant grades some people seem intent on dishing out. It’s whether you win a World Series or two along the way that matters and, despite our financial disadvantage to nearly all of our competitors, we’ve had our chances over the last 15 years or so.

If the 2014 Wild Card game hadn’t turned from a dream to a nightmare, it could all feel so different.

But let’s not dwell on all the negatives.

With a bit of time to reflect, I can understand the trade and I like the direction they took in getting three players who could all turn into good (maybe better than good) regulars. They may all fail to live up to their promise and if so then we can look back in five years and lament the loss of Sonny all the more, but no one really knows how such deals will turn out.

Another much-missed former A’s pitcher Gio Gonzalez nearly pitched a no-hitter last night for the Nationals. Beyond the Boxscore covered his December 2011 trade to Washington in one of their excellent Trade Retrospective pieces earlier this year and noted that whilst the haul we got for him looked really impressive at the time, the returns amounted to a “disappointing outcome considering the apparent immediate advantage”. You just never know.

What I do know is that I’m going to ignore any Sonny starts for the timebeing (small mercy that we’ve completed our season series against the Yankees). 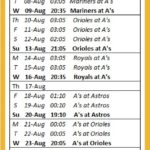 I’m also going to hold onto the hope that Dustin Fowler, Jorge Mateo and James Kaprielian all become fan favourites for the A’s and that – hope of all hopes – we might even be able to sign one or two of them to contract extensions once we get to that point rather than go through the long goodbye process once again.

The August schedule of A’s games can be found by clicking the thumbnail on the right. Other than the current Giants series and the month-ending series in Anaheim, at least one game from all the other series will be played at a convenient time for us to watch live.

It would be great if we weren’t all well-skilled in finding bright spots at the end of a loss-filled season, yet that we are and I’ll be glad of every gasp-inducing fielding play by Matt Chapman and Yonder Alonso re-discovering his home run stroke.

Nevermind what anyone else says: we all know he only slowed down because he didn’t want to be traded from Oakland.