As an Oakland A’s fan, naturally I take a closer interest in the team’s dealings than the other 29 MLB clubs.

However, it’s difficult not to spend some time considering what General Manager Billy Beane has done this offseason, regardless of your team allegiance.

His latest trade, completed on Saturday, saw the A’s acquire Ben Zobrist and Yunel Escobar from the Tampa Bay Rays for John Jason and two prospects. The many people who depicted Oakland as a team punting 2015 for a rebuilding effortÂ after trading away Josh Donaldson, Brandon Moss, Derek Norris and Jeff Samardzija are being well and truly proved wrong.

Which doesn’t mean that the A’s are now favourites in theÂ AL West, but does mean that they will be an interesting team with a genuine chance of mounting a playoff push yet again. That’s a very positive position to be in bearing in mind the financial disadvantage Oakland have against many of their competitors.

The extent of the change to the batting line-up in particular is shown vividly by Roster Resource website (formerly known as MLB Depth Charts). Here’s an abbreviated version of their projected Oakland A’s 13 position players as of 11 January. 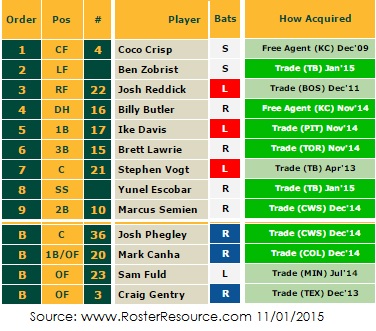 Eight of the thirteen are new recruits and that definitely justifies using the word ‘overhaul’ to describe how the lineup has been affected. A major change was needed after the second-half collapse in 2014, with Beane spotting earlier than most that the team was moving backwards after the 2012 and 2013 AL West titles.

To the doubters, Beane will always be rubbished so long as the team doesn’t win a World Series. Of course, winning the Fall Classic is the ultimate aim of every team, yet it is only in the emotional and sensationalist mindsetÂ that this is the only measure of success. It would be a bit like disregardingÂ the achievements of Swansea and Southampton in recent Premier League seasons because they haven’t come close to winning the title.

‘Flags fly forever’ is the familiar baseball refrain when it comes to winning things and there’s a basic truth to that. How you see that as a fan really depends on your own perspective. Would you trade nine very long seasons of poor baseball – getting to the point each year of almost grudgingly watching the games knowing how painful and dull it will be – for one glorious season in which you win a World Series? Is that more enjoyable than watching a competitive team for, say, seven out of ten seasons irrespective of whether they actually lift the trophy at the end of one of them?

None of us get such a choice, but I do think it raises a valid general point that gets to the heart of why we support a team.

It’s part of my daily routine (if I didn’t get to watch the game live due to the time difference)Â that the first thing I do when I sit down with my breakfast is click on the MLB At Bat app to seeÂ if we won or lost. I know it doesn’t really matter, but you wouldn’t thinkÂ it in those few seconds nervously waiting for the score to load up and the cheer or groan that the outcome involuntarily leads to.

I’d love the A’s to win another World Series, the first during my time supporting the team, yet I also know if we do the joy will only last the winterÂ before the next season comes along and the roller-coaster begins again regardless. Champions or not, I’ll still have the same joy at Opening Day, the same anticipation for results showing up on my tablet, the same extremes of emotions from leaping in the air at an important home run to holding my head in despair at a winning position lost.

The naysayers can snipe all they like at Billy Beane, and like everyone else he makes his share of decisions that don’t pay-off, but I know more often than not that the A’s will give me reason to enjoy turning on a day-game on a British Sunday evening ahead ofÂ a long week at work ahead, or sacrificing some sleep to listen to some innings of a 3 a.m. start as the Oakland underdogs take another shot at upsetting the odds on their wealthier rivals.

The one thing I don’t want from my baseball team is for it to be dull and that’s one piece of criticism that even the most rampant Beane haters would struggle to Â level at the A’s.

Everything changes, but everything stays the same for Oakland. I don’t know whether the changes are going to work, but I’m filled with the sameÂ excitement around finding out.