Opening Day on Monday was a real treat, with a batch of good games to watch live during the British evening.

The first two games of the day were both available to British fans without an MLB.TV subscription: the first – Marlins vs Nationals – being the MLB.com Free Game of the Day, the second – Braves vs Mets – was the first of three games on TV (BT Sport/ESPN).

I went for the latter and as it was a strong pitching match-up, Julio Teheran and Noah Syndergaard, I thought I’d get a bit of score-keeping practice in for the season ahead by jotting down the first three innings.

When I use colours on my scorecard I mark hits, walks and base advancement in blue, and outs in red. My expectation that my red pen would get most of the work proved to be correct. 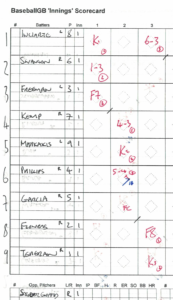 It’s not stating anything outrageous to say that Syndergaard is one of the best pitchers in the Majors, but what’s been really noticeable over the past year and a bit is how he has elevated himself into an elite group of pitchers whose starts are an event. Even accounting for the pomp and ceremony of Opening Day, that was abundantly clear at Citi Field on Monday.

Syndergaard was in dominant form right from the off, his blazing fastball (98 MPH was his run-of-the-mill average offering) and ridiculous slider were a nightmare for the Braves hitters.

The first five went down in order before Brandon Phillips, making his debut for Atlanta after his off-season trade from the Cincinnati Reds, was able to notch a single. The Mets’ starter was unfussed by this and Adonis Garcia subsequently grounded into a force-out at second to end the inning before Syndergaard set the Braves down in order in the third. 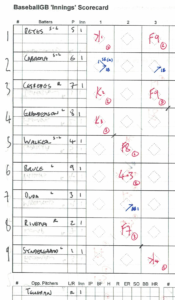 Teheran was able to keep pace by blanking the Mets through the first three innings too.

It wasn’t quite so clean as Syndergaard’s innings as Teheran allowed a base-runner in each (two singles and a walk); however he was able to strand them on all three occasions.

The starting pitchers continued to match each other over the next three innings before the game was turned over to the bullpens for the final third of the game.

Things immediately went wrong for the Braves from there as the Mets put up a six-spot in the seventh inning for what proved to be the only runs of the game.

Had I continued to keep score of the entire game I would have received an Opening Day score-keeping lesson. Score-keepers soon learn that you must never assume a play or call will be made and should watch it to a conclusion before noting anything down, but in MLB now we also have to take into account that an umpire’s initial call is no longer final.

Wilmer Flores came into the game as a pinch-runner and was originally called out at a very close play at the plate. The Mets called for a replay and this showed that Flores had just beaten out the throw from centre-field. The course of the game may well have been very different had the replay challenge not been available and it was the type of key decision that replay review helps greatly with (there was no blame attached to the home plate umpire’s original call as it was very marginal and looked out on first viewing).

Had I marked down the original out call in my red pen it would have been a messy job to correct it. That’s the type of situation that makes keeping score in pencil a preference for many; however I’ve found that once you start using coloured pens it makes such a big visual difference that you really don’t want to go back to plain-old pencil (unless that’s all you have to hand).

The answer is simply practicing so that you reduce the amount of mistakes and/or corrections on a scorecard and here was a perfect example of holding back on committing pen to paper on a play that might be challenged.

Whilst I didn’t directly learn that lesson here – as I didn’t score that part of the game – I did find out that the new pens I had bought bleeded through into the other side of the paper.

The Atlanta Braves need to find a way to get the better of the Mets’ outstanding pitching (Jacob deGrom is next up when the series resumes on Wednesday); I need to buy some new pens.

I think I’ve got the slightly easier task of the two.

Scorecards in Action: Jon Lester’s debut for the...