Dick Bonalewicz: A progressive US baseball coach whose British clinics were legendary 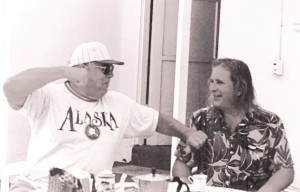 Back in May, we ran a story written by Jeff Archer on mid-week baseball inÂ Britain in the 1970s. The “biggest highlight,”Â in Jeff’s view, was the coaching programmeÂ based around the visit to Britain of the State University of New York at Brockport. Sadly, Dick Bonalewicz,Â the manager of that team, very recently passed away. Jeff emailed me with the photo to the right (“This was his favorite pose; however, he never followed through on the punch,” wrote Jeff) and theÂ story below on Dick.

When I read the Fall River Herald Newsthis morning, I wasnâ€™t ready for what I saw on the obituary page. Dick Bonalewicz died. The name may be familiar with some participants in British baseball for his contribution to the game in 1979. He took his team, the State University of New York at Brockport Eagles to the UK and conducted clinics and played against British opponents or performed inter-squad games. His clinics and their methods were legendary at the time in Britain. Dick set up players by position and those who attended the clinics could go to a position, such as first base, and have the first basemen discuss all the moves necessary to play the position. Then, they could move on to another position and see a similar demonstration. It was like attending a baseball supermarket.Â

I met Dick in 1978. One morning, there was a knock on my door in Cowley, Uxbridge. When I opened it, he thrust his hand forward and said, â€œHi, Iâ€™m Dick Bonalewicz, coach of the Brockport Eagles.â€ He spent the next three days at my house. One of the first things that we discovered was that we attended the same high school in Fall River, Massachusetts in the US. He was six years older than I, so I did not remember him. Despite our living only a few miles apart for years, we did not meet until we were thousands of miles from our original home towns.Â

Dick was a revolutionary coach who designed his own equipment, including far-fetched sliding pits that amazed even major league coaches. He did not go along with something solely because that was the way it was done. If he could improve something, he did.Â

We became close friends and after his visit to the UK in 1979, he returned the following year to spend a month with me. For years, Dick was a professor of Physiology at Brockport and then in the early 1980s, he moved on to Gannon College in Pennsylvania where he was the head of the Physical Education department until recently. Over the years, he visited my home in California several times and we always kept in touch. The last I heard from him was about a year ago. Just after, he was diagnosed with lung cancer and the disease spread quickly. He never smoked a cigarette a day in his life, so it was a fluke that he should have developed lung cancer.

Dick Bonalewiczâ€™ legacy in Britain was brief, but long-lasting. Many of the youngsters who attended his clinics spoke of them for years after and told how they learned so much from them. Plus, one of his players, Tommy Mosher, spent the 1980 summer in Cowley and ran part of the playground baseball program that the Borough of Hillingdon officially recognized and donated a small grant for the expenses of the instructors.Â

For those who remember me and my participation in British baseball from 1975-1980, many will recall that I was not exactly the most humble participant in the sport. I was knowledgeable about baseball at all levels and gave numerous clinics. I was not shy about my talents. However, Dick Bonalewicz was one of very few people whom I would step aside for if he was present and talked baseball. He not only coached university baseball in the US, but he was the consummate teacher. At any time, day or night, Dick would discuss baseball equally with accomplished players or beginners. It did not make a difference. Today, I lost a great friend. More importantly, baseball did as well.