In 1994 a new league was born. It flew under the RADAR of many outside of the American Midwest. It was a time when independent leagues came and went, the Major League was plagued by drug and steroid controversy, and many of the big names in the game today were just starting out in their careers, in some cases still tagging along to ballgames with their moms and pops. Today the League has topped over 900,000 attendees in a single season, a claim that can be made by no other summer collegiate baseball league. Â 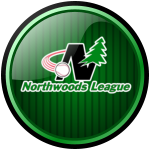 As it comes to the end of its season, before the players head back to their studies or join up with one of the better known Minor League teams and baseball fans in the Midwest devote their entire attention to the pennant races of MLB, let’s take a short look at the Northwoods League.

The Northwoods League was created to provide university students, the next generation of ball players, a chance to experience life on the circuit without major disruption to their studies. Players must have NCAA eligibility; in other words cannot be paid, must attend a specified number of classes, and must perform to a certain academic level to be part of the team.

Unlike most MLB-affiliated Minor Leagues and Independent Leagues, the Northwoods chose to use wooden bats, allowing players to practice with the sort of equipment that would be used in the bigs.

The League is named for the famed woods of the upper Midwest and lower Canada, where the teams are based (7 in Minnesota, 6 in Wisconsin, 1 each in Michigan, Iowa and Ontario, Canada.) It is split into North Division and South Division. Although, as with many league division splits, the geographical location of some teams seems to play little part in whether they are in the North or South.

The North and South divisions meet for an All Star game once a year, in much the same fashion as in Major League Baseball. And just like MLB it is the winning team of each Division pennant who meet in the final.

At least 54 Major League players once graced the Northwoods League. Some of the teams even play in older stadiums which once belonged to other Minor or Independent teams from the golden years.
For example: last yearâ€™s Northwoods League winners, the Eau Claire Express, play at Carson Park, Wisconsin. Carson Park was once home to the Eau Claire Bears of the Northern League, for whomÂ Hank Aaron, Billy Bruton, Wes Covington,Â Joe Torre,Â Bob Uecker (famous current Milwaukee Brewers funnyman commentator) and others have filled its roster. Thereâ€™s even a bust of Hammerinâ€™ Hank outside the stadium entrance.
As an aside; itâ€™s a beautiful stadium. Built between several curving lakes with an American Football field one side, Baseball diamond the other, and tennis courts surrounding.

Which is the thing really. The Northwoods League is beautiful. Itâ€™s about the community and students coming together in college towns. Itâ€™s about silly competitions for the kids between innings and crowd involvement. Itâ€™s about lakeside vistas and woodland spirit. Itâ€™s about hotdogs and beer, funny mascots and the Ballboy being the kid who knocked your door the other weekend to retrieve his frizbee from your back yard. When youâ€™re at a game it feels like the Bullpen Manager could almost be the guy who packs your Momâ€™s groceries at the local Save-U-Mart. It is, essentially, what baseball was always supposed to be about.

If thereâ€™s a rain delay weâ€™ll just grab some popcorn and another local beer, and watch the groundskeepers scuttle about with the tarps or the players perform the crazy dance they choreographed on Friday night at the student bar.

This is the Northwoods League, may it continue another 17 years and more!

BST guide to this week’s MLB games: Eleven to choose from

Great article, Mark. Have to admit that the Northwoods League has passed me by up until this point. Always good to learn something new!

This link is pretty good –

Yeah. I love reading about this type of thing. Awesome article.

This article was an excellent read. The writer ( Mark ), captures the joy of watching NWL players compete in the 16 team league using the unaccustomed wooden bat. As noted, many graduates from the league have attained major league status. Perhaps the most notable is Curtis Granderson of the N.Y. Yankees.

I chuckled at the reference to the dances and other stunts performed during rain delays. We have often witnessed the visiting team put on crowd pleasing performance, only to be outdone by the home team.

Perhaps the saddest day of the season is the last home game. Upon completion of the game, it is time to say a tearful goodbye to our favourite players for another year. Likes spokes on a wheel, “the boys of summer ” depart in various directions for home.

A vibrant dugout has now disappeared, replaced by a lone sweeper.

Mark, your excellent article brought back a lot of fond memories. Keep in the good work.