On Tuesday, an analysis of the â€˜earlyâ€™ working week MLB games in 2011 showed that the Chicago Cubs are the team that offer the most live baseball for fans in the UK to follow during the British evening.

The Rays, Tigers, Padres and Aâ€™s all followed closely behind, but which teams require Brits to stay up all hours to follow their games? And which days of the week and months of the season are the best for catching a ballgame without sacrificing sleep?

Read on to find out.

As explained previously, an â€˜earlyâ€™ game is defined here as one that begins before midnight UK time. For the purposes of this analysis, weâ€™ll leave Saturday games (sacrificing sleep is not such an issue) and Sunday games (the vast majority are played during the British evening anyway) to one side and concentrate on the traditional working week of Monday to Friday.

The five teams that played the least number of early games in 2011 are a mix of clubs from both coasts, including contenders and also-rans of late.

Itâ€™s disappointing, although not overly surprising, to see the Angels at the bottom of the pile. They are a competitive organization and their Los Angeles (well, Anaheim) home should make them attractive to holidaying Brits. However, they have developed a strong fan base (averaging just over 39,000 for their 81 home games in 2011, fifth highest in the Majors) so it makes sense for them to play more games in the evening to capitalize on this.

The Orioles and Marlins are at the other end of the scale when it comes to attendance (26th and 28th respectively) and they presumably work on the principle that if youâ€™re struggling to attract fans to the ballpark already, you canâ€™t afford to play many games when the adults are at work and the kids are at school.

The Braves have a decent following in the UK so their relatively low total is a bit of a shame, although maybe their British-based fans were glad of the small number of early games during their September collapse.

From the first (shortened) week to the last of the 2011 season, you could watch or listen to at least one live game at a convenient time every single week.

Four weeks in the season provided early games on all five week days, including the first full week of the regular season (week beginning 4 April) that included a season-high 26 early contests.

To make a fair comparison between week days, I have disregarded the three weeks which only contained a partial schedule of games (the Thursday and Friday of the first week, the All-Star break week and the final week of the season). 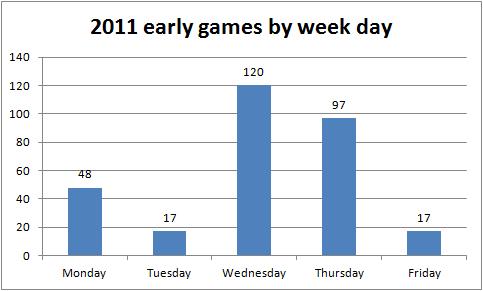 Wednesday evening was the time to set aside if you wanted to catch some live baseball in 2011, with the traditional â€˜get-awayâ€™ Thursday following up with a decent number of early games as well.

Outside of the three partial weeks, there was only one week (week beginning 16 May) in which Wednesday didnâ€™t offer us at least one early game and Thursday delivered some live baseball at a convenient time without exception.

Tuesday is normally the evening that you can set aside for other things (if indeed you have the time or inclination for anything other than baseball, of course), Friday matches Tuesday’s totalÂ due to the â€˜Cubbies bonusâ€™ explained in part one and the Monday totalÂ is boosted slightly by public holidays.

There is a clear trend when it comes to the monthly distribution of early games. There are plenty to watch or listen to in the first two months, but we then get a relative dip in the middle of the season before things pick up down the September stretch. 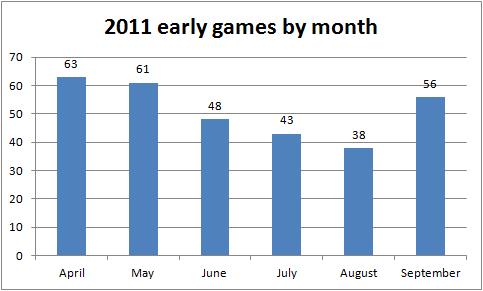 You would have to compare data from other years (something I plan to do over the next few years) and look at each teamâ€™s case to really get to the cause of this. My suspicion is that this trend is something you will see most years and can largely be put down to teams sensibly avoiding playing during the blazing midday sunshine in those months.

It should be noted that July includes the three-day All-Star break and the regular season ended on 28 September, leaving the final two days of that month with no such games being played.

So there we have it. The Cubs are your best bet if you want to follow a team that offers the most games at a convenient time in the UK. Wednesday was the best night of the week to catch live games in 2011 and the first two months of the season gave us the chance to follow plenty of the action, with the final month of the regular season also being UK-fan friendly.

Domestic baseball in Britain at least as early as 1876

All the rangers do is lose lose no matter what what and their hands go down and they? stay there and they stay there!

[…] Every week there are a decent number of games you can watch or listen to live without needing to stay up all hours to do so. The first week of the season normally provides the most games and the 25 this week is in line with that. Typically you can expect there to be between 10-15 â€˜earlyâ€™ games played every working week. A two-part analysis of 2011â€™s early games can be found here and here. […]