George Price, an octogenarian from the north-west corner of England, is one of the generous collaborators who make Project COBB function. He has previously proved to be very helpful in supplying team photos and identifying players for uses such as the Great Britain national team archive, and very recently he has uncovered a couple of more textual gems.

The first is a Merseyside Baseball League handbook from 1951. Having this item has given me the inspiration to set up a league handbooks section on the Project COBB site, which I will expand over the coming weeks. These small artefacts are quite easily one of theÂ best resources for historical information onÂ fixtures, competition structures, team personnel, and club details.

The second item is an amazing collection of minutes from general meetings held by the Atoms and the Liverpool Aces between 1957 and 1964. It gives a rare glimpse into the running of an amateur baseball club in Britain during this poorly chronicled period. I have made scans of the photocopies that George sent me, but they’re not of a sufficient quality to put on the site. However, anyone interested in seeing a PDF should contact me here.

I had the pleasure of meeting George earlier this year, since he was welcomed as a guest of honour by Richmond Baseball Club as part of a trip arranged by his son as an 80th birthday present, and I happened to be scoring that today. A couple of the photos taken that day are provided below. 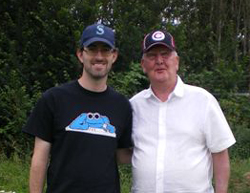 George played baseball in Liverpool during his younger years. His father, Dave Price, was a noted ambassador for Merseyside and British baseball during the 1960s and even raised awareness of the game here over in the States on family visits.

Marlins mobbed by Angels in search for offseason spotlight

Rounding the Bases: Catching up

Even in my early forays researching British baseball history, I can fully appreciate the value of league handbooks like the above mentioned. Those seemingly basic details of teams and fixtures are the foundations on which the story of a season is based and provide a great framework to plan further research around. Looking forward to seeing others; hopefully the creation of a specific area for them might help to uncover a few more gems.

I am the son of Dave Price and only sibling of my Big Bro. George Price.
I played for The Caledonians a few times, but mostly sat on the bench, as I was much less skilled at the game than George (who was also an excellent footballer)
I left Liverpool in 1957 for Canada and have lived in Vancouver for the last 45 years.On a visit to see me and my family in 1964, I took my parents on a side trip to the Detroit area in Michigan, where my Dad was reunited with his older brother Bill who left Liverpool 44 years earlier and had never been back. Bill arranged for my Dad to go to a Detroit Tigers Game, where, as Baseball Commissioner for England, he received the VIP treatment and watched the game from Governor of Michigan George Romney’s private suite.
Best wishes to every baseballer over there.
Dave Price Jr.

Many thanks for stopping by and leaving your story.

I have had the pleasure of exchanging many emails with George and also met him when he came down to watch a game in London a few years back.