I was generously sent a copy of the photo below by Dick Miller. Reading off the original, Dick could make out the words “Dewar Trophy” in the inscription, which almost certainly places the item as being from the 1890s. According to an article by James Wilson entitled “Baseball in England, and its rivals” that was published in The Strand MagazineÂ in 1898:

The greatest supporters of the game in England [include] American business firms, such as the Messrs. Fuller, the great confectioners; Messrs. Dewar, of whisky fame; Â [and] J. Earle of the Remington Typewriter Co. [â€¦] Â These gentleman assist the game, both in a monetary sense and by personally attending the games and bringing their friends.” 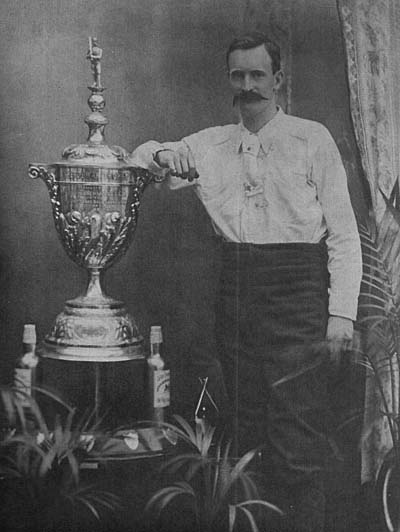 The trophy is presumably one of the examples of the Dewar company assisting the game in a monetary sense.

In addition, all three business entered teams in the London Association competition of the mid-1890s. In fact, Dewars and Remingtons were involved in one of the early classic tussles of British baseball, a 12-inning belter of a contest at the Crystal Palace on 20 August 1895. The ebb and flow is evident from the linescore.

The Dewar Trophy was not unique in this early part of British baseball history. Other benefactors during the first wave of sustained domestic competition included Albert Goodwill Spalding andÂ British Baseball Hall of FamerÂ Sir Francis Ley, and both of these men are known to have donated trophies of similar splendour to commemorate champions.