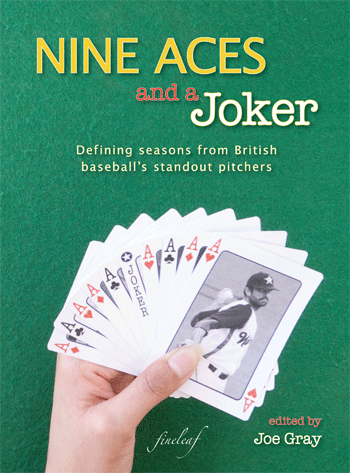 The two chapters can be downloaded from the Project COBB wesbite here:
Access sample chapters

The first is Wally O’Neil’s story, focusing on his incredible season in 1965 with the Stretford Saints, where he met George Best on the baseball field, led his club team into European competition, and faced off against the might Dutch for Great Britain at Crystal Palace.

The second features Cody Cain in 1993, at the beginning of his incredible domestic career, where he was in a season-long battle to preserve a 0.00 earned-run average, and where he got to pitch against a childhood hero who he’d watched playing pro baseball growing up in the States.

As a reminder, the full book is availableÂ both in print and as a Kindle eBook.

[…] highlight of my writing year in 2012 was contributing two chapters to the Nine Aces and a Joker book (an excellent way to spend a few pounds of Xmas money if you’ve not already bought your copy, […]