For several years now,Â BaseballGB hasÂ provided a guide to the MLB games that British fans can enjoy during the evening, U.K. time.

Last year I compiled all the data to produce a guide to the 2011 ‘early’ games and this is the first of two columns in which I do the same for the 2012 season.

As before, Iâ€™ve focused on games scheduled for the working week (Monday to Friday inclusive).Â ForÂ many of us it’s easier to catch aÂ late-night game on Saturday than a mid-week game and the vast majority of Sunday games are played during the British evening anyway. That means the working week ‘early’ games produce ‘bonus’ baseball that we can watch without staying up all hours.

The figures only include games that were due to be played before midnight U.K. time when I checked the fixture list at the start of the respective week. Games rearranged at short notice during the week havenâ€™t been included for two reasons: 1) I canâ€™t be sure I always added them to the list and I wanted the data to be consistent, 2) a late rearranged fixture isnâ€™t so useful because by their nature they donâ€™t help you plan for the weekâ€™s viewing/listening. 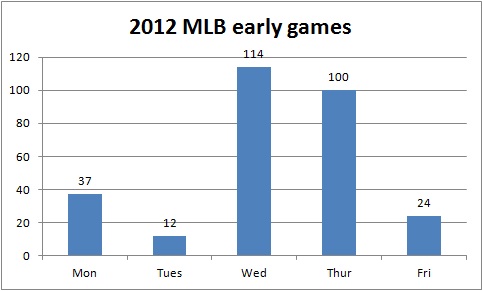 When it comes to planning your week, Wednesday and Thursday are the best two evenings to keep clear for live baseball.Â  BBC 5 Live Sports Extra switched from a Sunday night slot to a Thursday evening show (with some Sunday games thrown in for good measure) in 2012 and there were plenty of games for the team to pick from. 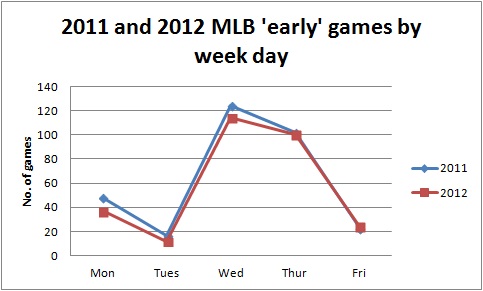 The comparison chart shows that 2012 followed the same pattern as 2011 when it came to which weekdays offered the best chance to catch some live baseball at a convenient time.Â  The Monday total is boosted by two U.S. public holidays each year, on which a significant proportion of games are played during the day-time, whilst Wrigley Field is often the venue for a Friday early fixture. Of the 24 played in 2012, 13 included the Chicago Cubs. 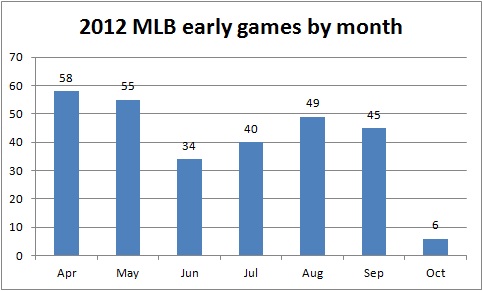 Looking at the early games from a monthly basis we see that the season starts off brilliantly, then drops in June before picking up again during August and September.Â ‘October baseball’ is often used as a shorthand for a teamÂ playing the postseason, but inÂ 2012Â the regular season spillled over into the first three days of that month and the final day of the season (3 October) produced 6 early games. 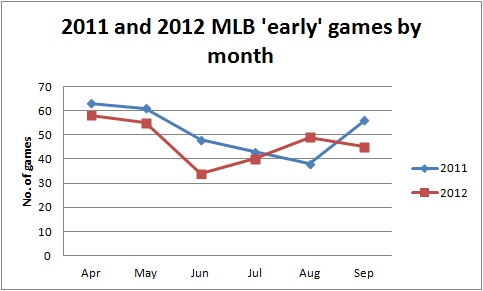 When we put the monthly distribution of 2012 games alongside that of 2011 we see that there are a few notable differences*.

The drop in games in June 2012 looks particularly striking and there are no obvious reasons, looking at the schedules, to account for it.Â  Seeing a dip in June is perhaps preferable to one in August, with games starting to count for that little bit more during the second half of the season, and we did get an appreciable rise in August early games in 2012 compared to 2011 (up from 38 to 49). That was counterbalanced by a decrease during September.

In Part Two, we’ll take a look at how the early games were distributed among the MLB teams.

[…] the first part of our review of the pre-midnight U.K. time, working week MLB games played during 2012 we focused […]