The Croydon Pirates at the 2005 European Cupwinners Cup (Part 1) 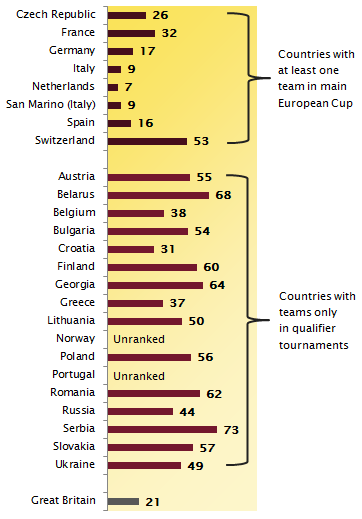 Countries with clubs involved in competitions sanctioned by the Confederation of European Baseball this season, with their world rankings as of March 2013

In 2013, baseball clubs from 25 European countries will take part in competitions sanctioned by the continent’s baseball federation. The highest-ranked European nation absent from this list is Great Britain (#21 in the world), and the only other ranked countries not sending a teamÂ are Israel (#28), Sweden (#34), Slovenia (#58), Ireland (#61), Hungary (#63), and Latvia (#72).

It is eight years since any British teams competed in a European club competition. Among the prohibitive factors contributing to this are the increasing strictness of the stipulations by the Confederation of European Baseball (CEB) against non-passport holders (see Rule 7a, for example) and the difficulty of self-funding travel at a time of growing economic strain.

The last season that British clubs competed was 2005, when: the Edinburgh Diamond Devils went 0-and-4 in the CEB Cup Qualifier; a GB Juniors squad, playing under the moniker of Greater Berkshire 1938, finished fourth out of the eight teams in their half of the European Cup B-Pool; and the Croydon Pirates competed in the Cupwinners Cup.

Josh Chetwynd’s still-indispensable chronicle Baseball in Europe, which I have gratefully drawn on in this article, records the first European Cup — historically, the continent’s premier club competition — as having taken place in 1963 and been won by Picadero Jockey Club, a Spanish side.

AÂ record of British clubs in major European club competitions (kindly compiled by Mark Tobin for the now-defunctÂ British Baseball DataÂ website and currently housed online by Project COBB) reveals the first British entry into the competition to have occurred in 1965.Â That year, the Stretford Saints — despite the best efforts of ace pitcher Wally O’NeilÂ — went winless in their two games in the event’s northern section. 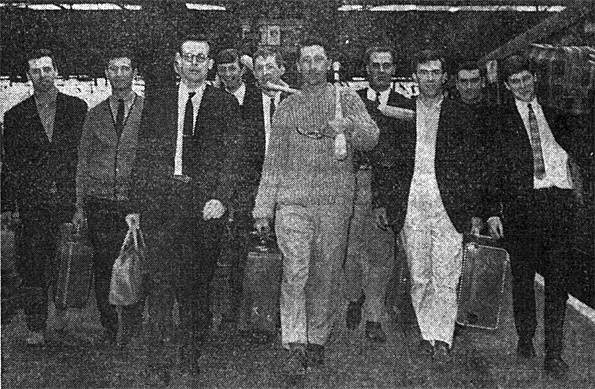 In the closer of the Saints’ two contests in 1965, against Belgian outfit Luchtbal, they fell 6-5. This became all the more respectable when the Hull Aces — the Saint’s great rivals — were unable to score a single run in their three trips later in the decade.Â After the last of Hull’s trips to the Continent, in 1969, there was an 18-year span with no British clubs sides at all in major European competition. 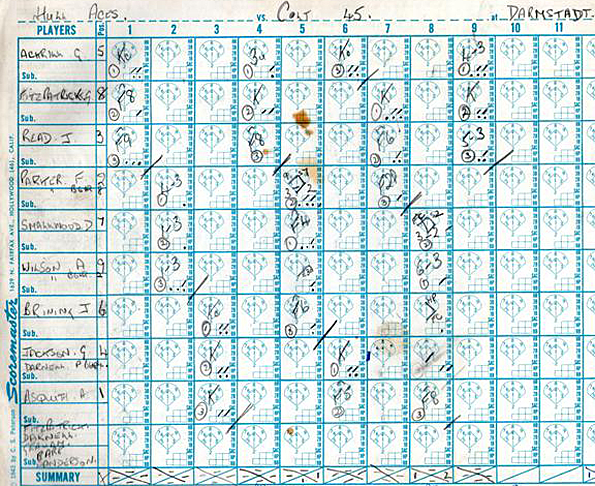 The return of British baseball to European club competition came with the Southglade Hornets’ entry into the 1988 European Cup B-Pool tournament. They finished fourth of seven teams, with their solitary victory coming over the ZÃ¼rich Lions. 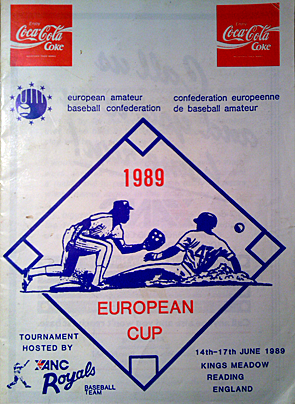 The programme cover for the European Cup B-Pool, hosted in Reading and featuring the Enfield Spartans

Over the next five seasons, two additional club competitions were launched by the European federation. In 1990 came the Cupwinners Cup and in 1993 the CEB Cup, which are described by Chetwynd as the most and second-most prestigious events, respectively, after the European Cup. The Leeds City Royals were the first British team to compete in the A-Pool of one of these events, which they did in 1993 (going 0-and-3 in their group and losing their positional play-off too).

However, in both competitions, as with the European Cup, there have been B-Pool events run.

In 2003, the Windsor Bears were victorious in their half of the European Cupwinners Cup B-Pool, compiling a 5-0 record in the round-robin competition. This earned Britain a berth in the Cupwinners Cup A-Pool in 2004, which the Bears won their way back to fill. In play-offs for the lower placings in the 2004 tournament, Windsor’s 10-6 victory over the French representativesÂ Savigny (the first ever win by a British team in an A-Pool event) preserved Britain’s spot on the upper rung.

A couple of months after the Bears defended Britain’s A-Pool berth, they met the Croydon Pirates in the domestic national final, which would determine the qualifier for the Cupwinners Cup in 2005. The Pirates were underdogs, not least because they had used all of their regular arms to get to the winner-takes-all showdown. In contrast, Windsor still had ace hurler Ryan Koback in reserve; an indication of his pedigree was given by his six regular-season shutouts the previous year.

Croydon settled on part-time knuckleballer Jeff McDonald for the biggest game in the club’s 20-plus-year history up to that point. He gave up five home runs, including a grand slam to former Pirate Roddi Liebenberg, but still picked up a complete-game, 12-10 victory.

Four Croydon players had multi-hit games. The Canadian pairing of Ian Bates and Charlie Caskey went 4-for-5 and 2-for-5, respectively, while the Australian Rhys Dixon (whose brother played professionally in the States) was 3-for-4 and there was a 3-or-5 performance from Brett Willemburg (whose .500 batting average for South Africa at the 2006 World Baseball Classic placed him behind only Adam Stern and one Ken Griffey Jr at that inaugural event).

Part 2 of this article will tell the story of what happened to Croydon in the 2005 European Cupwinners Cup A-Pool.

Croydon PiratesFeaturedOne from the Past
5 comments
0
FacebookTwitterPinterestEmail

I must admit to struggling a bit with the nuances of European club competitions, so if any corrections are needed don’t be afraid to shout.

Nice read, interesting stuff. Especially with the debate at the moment surrounding whether we should be doing more to enter these tournaments.

[…] Part 1 of this two-part article provided a brief history of British clubs in European competition and the context of the Croydon Pirates’ entry into the 2005 Cupwinners Cup. This second part tells the story of what happened on the Pirates’ tour. The quotes and memories are taken from recollections shared over email correspondence approximately four years ago. Particular thanks go to Ryan Kirkby, Evan Donovan,Â Charlie Caskey, Alec Gatrell, and Andy Kulina. Details for the game against Regensburg are taken from a copy of the official scorecard that was kindly lent to me by Dave Ward. […]

[…] Recently,Â I wrote about the history of British clubs in European competitions sanctioned by the continent’s baseball confederation. Of course, there are many other tournaments held in Europe that bring together teams from different countries, including Britain. For instance, several British teams have forged links with clubs on the Continent, particularly in The Netherlands, and made regular visits to small-scale tournaments that they have hosted. […]