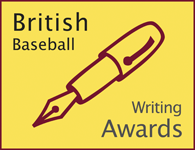 We can now announce the winners of theÂ 2013 British Baseball Writing Awards. There were three award-winning entries, and they were of such varied themes that it did not seem reasonable to try to rank them; thus, the prize fund will be shared equally between the winners.

The award-winning writers were:

All three entries have been accepted for publication in the first issue ofÂ This Diamond Isle, a new journal from Project COBB, and you will be able to read them all in the new year.

Championship Series off to great start

A treasure from British baseball’s past