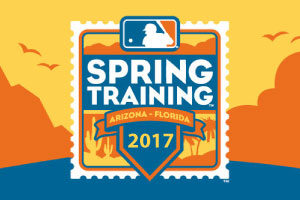 We’re into the second section of MLB Spring Training 2017.

This is the period of the next two weeks when the U.S. has moved to Daylight Saving Time and we in the UK are holding on to the winter clock for a little bit longer.

That means the normal time difference between us and the main time zones in the States is reduced by one hour. Generally you’ll find that start times are shown on websites in Eastern Time, which will be four hours behind GMT for the next two weeks rather than the usual five.

The following list shows all of the games that will be available to watch on MLB.TV, with start times listed in GMT.

As with my first installment of games, I’ve used grey shading to more clearly separate out the days and then itallicised games that do take place in the early hours. For those games, I have still listed them under the date in which they are played in the States, so, for example, the game on 12 March between the White Sox and the DodgersÂ  is actually at 2.05 am 13 March for us.

As previously noted, the regional TV networks only show a selection of games during Spring Training, hence why the MLB.TV schedule doesn’t cover all of the games.

However, MLB.TV subscribers, or those who have bought Gameday Audio (or the MLB At Bat Premium app), will be able to listen to radio commentary of all games.

ESPN will be broadcasting two Spring Training games on 23 March:

The schedules for the full range of BT Sport channels are not yet available online for that date, so whether they will be broadcast here on UK TV is still to be confirmed.

Is the Price right?

Thanks for this. It’s handy having all the broadcast schedule on one page, and in GMT too – better than the mlb.tv schedule!

No problem, Steve. Glad it’s of use!

Hi Matt…..I just bought my full subscription to MLBTV yesterday. It’s the first time I’ve done it. I was surfing around trying to find highlights of A’s games in Spring Training so far but all they seem to have were short videos of certain plays. Do MLBTV not do game highlights for ST games? Cheers

Glad to read you’ve taken the plunge! No, they don’t bother with doing the highlights videos for ST. They’ll start up again with the regular season