Thank You For The A’s: Looking forward to a Break

Let’s be honest, it’s not been a good few weeks for Oakland.

If ever a run of four games should lead to better things, a four-game sweep over the New York Yankees should be it.

Not for these A’s, though.

We win four games, then get swept in four by the Houston Astros, then win four games in a row (sweeping the White Sox and then a rare win against the Astros) before losing six on the spin (and counting). Three of those losses being swept at home by the Atlanta Braves, during which we were very nearly on the wrong end of a no-hitter.

The best you can say is that we’re consistent with our inconsistency.

In among it all was the somewhat surprising departure of team leader Stephen Vogt.

Whether those in the Coliseum bleachers still did believe in Stephen Vogt like they sang is up for debate. Bruce Maxwell looked like he should be given a shot and carrying three catchers always seems a waste of a roster spot, so something had to give and that something was the 32-year-old struggling to hit above .200 whilst earning a shade under $3m, rather than the 29-year-old Josh Phegley struggling to hit .200 whilst earning the Major League minimum.

Leadership is an intangible that is easy to overstate, so whether Vogt would really have been a big help to the new wave of young talent is difficult to judge. All you can say is that if the A’s wanted to go with Phegley and Maxwell then it’s fair to conclude they need plate appearances to develop more than they need another good teammate taking playing time away from them.

Still, if Vogt was going to leave the Green and Gold, at least he’s landed with a team that’s difficult to dislike in the Milwaukee Brewers and it was hard not to enjoy watching him launch two homers in one game with his new team.

Three over the wall

Another good moment – clasping hold of anything that resembles such a thing – came on 24 June when Franklin Barreto made his Major League debut against the White Sox and hit a home run in the same game that fellow rookies Jaycob Brugman and Matt Olson went deep for the first time in the Big Leagues.

The Oakland Youth Movement is in full effect and that does make the losses a little easier to take. Even on Saturday, losing the second game against Atlanta, we could enjoy Paul Blackburn’s solid six innings on his Major League debut. Sean Manaea also pitched well in the series finale to add to what’s been a very encouraging season so far for the left-hander.

His name was met with modest enthusiasm from most prospect writers that I saw when he was acquired from the Royals a couple of years ago and he doesn’t look like someone who will develop into a true front-line starter, but if he can build on his first-half of the season then he has the makings of a dependable number three starter and those guys get plenty of money when they hit free agency.

As for free agency, Yonder Alonso’s days with the A’s seem numbered as the days on his current contract tick down. Much as he has raised the possibility of signing an extension with the A’s, you can’t help but feel that’s unlikely given Oakland’s track record and the presence of prospective first basemen Ryon Healy and Matt Olson.

A potential scene for Moneyball Two is ready to be written with Alonso turning up to the All-Star Game as the A’s representative only to be told he’d been traded during the flight to Miami.

That’s unlikely to happen in real life – although we know better than to put anything past Billy Beane – and we should at least be able to enjoy seeing him in the Green and Gold at the event. It will feel a bit like watching a player from your football team at the World Cup knowing that they’re going to scarper before pre-season training begins, but I guess we have to take what we can get.

Truth be told, Alonso has come back down to earth after his power surge in May and if he wants to build on his first half ahead of a free agent contract then a change of scenery to a play-off contender would do him good. As someone who wouldn’t have been fussed if he had been cut over the winter, there will certainly be no hard feelings on my side when he departs.

Who else will join Alonso in the ‘Roll Up, Roll Up, A’s for sale’ cattle market remains to be seen.

Oakland do have a player option for 2018 with Jed Lowrie so technicallyÂ he’s not a pending free agent, yet that’s more likely to be used as another reason to trade him than to keep hold of him for the remainder of the season.

There is talk of Gray potentially heading to the AL West-leading Houston Astros. In the recent two series against them (A’s record 1-6) David Paulino faced the A’s and he was discussed as a potential part of a deal by the commentators. He didn’t pitch particularly well against the A’s in either game and the announcement a few days ago that he’s been banned for 80 games for a drug suspension has nixed that one, although – as we know to our cost – the Astros have plenty more young talent available that could be packaged up.

It’s a tough one with Gray. I remember watching him pitch for Vanderbilt in the College World Series a short while after he was our first round pick in the 2011 draft and being excited at his potential. Last year’s injury and performance struggles were all the more frustrating because of how brilliantly he had pitched in 2015, when he took a step up from promising young starter to one of the best in the American League.

The harsh truth is that 2018 may well be another development year for Oakland and Gray will then only have one more year before he becomes a free agent. So if we can get a good haul for him now then it would be difficult to turn down, regardless if that means seeing him in a rival’s uniform. 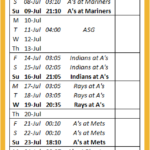 As I’ve reached the point where I’m not only writing off this season, but also next year as well (I’ll caveat that by saying that there’s potential for a few players to really jump forward and – with a bit of luck – an outside Wild Card run isn’t out of the question), the launch of the new UK Oakland A’s Twitter account deserves a mention.

Think of it as an online therapy group to support each other through the hard times.

A UK version of the July schedule of games can be found by clicking on the image above. You can then download and print it out.

Something tells me that All-Star break will feel particularly welcome once we get there this time next week.