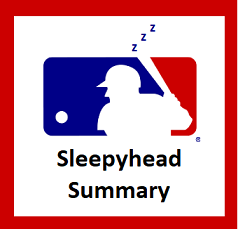 On Sunday, the Washington Nationals became the first team to win their division in 2017.

The Nationals completed a 3-1 series win over the Philadelphia to bring their NL East magic number down to 1 and then had to wait for the conclusion of the ongoing game between second-placed Miami and Atlanta.

The Marlins scored three runs across the eighth and ninth innings to lead, only for Atlanta to draw level 8-8 with three runs in the bottom of the ninth.

The Braves then walked-off in the eleventh to ensure Washington couldn’t be caught and could start their celebrations.

It’s the fourth time in six years that the Nats have won the NL East, but they’ll be hoping this time they can turn that into more than just a brief play-off run, as they’ve been dumped out in the Division Series stage the previous three times.

For weeks it looked as though the Los Angeles Dodgers would be the first team to clinch their division, but the once seemingly-unstoppable team are now making very hard work of getting over the NL West line. They were just swept in a four-game series by the Colorado Rockies to make it ten losses in a row and 15 losses from their last 16 games.

The Dodgers still have the best record in the Majors at 92-51 and a nine-game lead in the division, which shows how incredibly well they had been playing prior to the last two weeks.

It really is curious how a talent-laden team like this can suddenly go into such a tailspin. Still, when the Dodgers were threatening a historic win total it was noted that for many ultimately their play-off results would determine whether the season was a total success or not. They’ll come out of this bad spell soon enough, complete the formality of booking their play-off place, and if they go on to win the World Series at the end of it these regular season losses will seem a distant memory.

Elsewhere in the National League

The Arizona Diamondbacks had their winning run ended at 13 on Friday as they lost two of three against the San Diego Padres. The D-Backs still have a five-game lead over Colorado for the first NL Wild Card, despite the Rockies’ broom-wielding ways against the Dodgers, and the two teams will face each other at Chase Field for four-games starting on Monday night.

On Friday I pretty much had the Chicago Cubs pencilled-in as the NL Central champs, but then they were swept by the Milwaukee Brewers in a three-game series at Wrigley and the St Louis Cardinals also won three games against Pittsburgh to make it close once again. The Cubs have a two-game lead over their two rivals, whilst the Brewers and Cardinals are three behind the Rockies for the second Wild Card.

Milwaukee now host three games against Pittsburgh but will have to play out the season without starting pitcher Jimmy Nelson who unfortunately injured his shoulder in a freak accident when diving back into first base. St Louis host the Cincinnati Reds for a three-game set, whilst the Cubs host the New York Mets.

In the American League, the Cleveland Indians are going to lose again one day but they’re determined to put it off for as long as possible.

They swept a three-game series over the Baltimore Orioles to increase their winning run to 18 games, three behind the all-time MLB record of 21 held by the 1935 Chicago Cubs.

The American League record is 20 and set by the Oakland A’s in 2002, as featured in the film adaptation of Moneyball, and the A’s decided to honour that streak by sweeping a four-game series over the Houston Astros this past weekend.

That was good news for Cleveland too. The Astros had won seven straight heading into their series, but the A’s sweep plus the Indians’ continued run means they have edged ahead for the best record in the American League, 87-56 to 86-57.

The gap at the top of the AL East remains at 3.5 in Boston’s favour over the New York Yankees after both teams won their respective series 2-1 (Red Sox over the Rays, Yankees over the Rangers). The Yankees now have a 3.5 game lead over Minnesota for the first AL Wild Card after the Twins split a four-game series with the Kansas City Royals.

The Mariners lost the finale of their three-game series against the Los Angeles Angels, but took the first two to gain a little ground in the Wild Card race and they now have the cavalry coming in the form of Felix Hernandez (Thursday) and James Paxton (Friday) returning from the Disabled List. Seattle are three games behind the Twins for the second Wild Card, as are the Orioles. The Mariners now head into Texas for a crucial four-game series against the Rangers.

The Angels are the closest competitors to the Twins, trailing by one game, and have a home series against the Astros up next, with Kansas City and Texas 2.5 back.

The Rays are now at the back of the pack trailing by 3.5 games and will play their home three-game series against the New York Yankees at the Mets’ Citi Field due to the devastation caused by Hurricane Irma.