We’re a month on from the climax of the World Series, making it a month since we got to enjoy watching some live MLB games.

That makes it a good time to look back at the 2017 regular season from a British perspective and to review how we were able to follow games live at a convenient time.

My Monday previews every week during the regular season highlight all of the games that are scheduled to begin before midnight UK time during the working week (Monday to Friday).Â  I class these as ‘early games’ and have made a point to write about them for many years as they offer the perfect opportunity to catch some games during the working week without having to sacrifice too much sleep.

The main thing to note is that the 2017 experience was very similar to what we’ve come to expect in recent years. 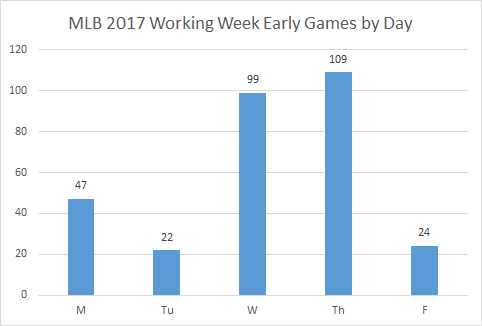 Wednesday and Thursday are usually our best bet to catch some early games.Â  This is due to them being the days when working-week series come to a close (Game Three of a three-game series etc) and teams will schedule those at around 1pm local time so that one or both teams can make an earlier start on travelling to their next series.

Tuesday always comes up with the lowest total and this year’s was even slightly inflated courtesy of the 4th of July holiday falling on that day.Â Â  Similarly, Monday always gets a boost from a couple of holidays.

Whilst there’s a hump in the middle when it comes to the days of the week, the month-by-month picture starts off with a peak in April and then tails off. 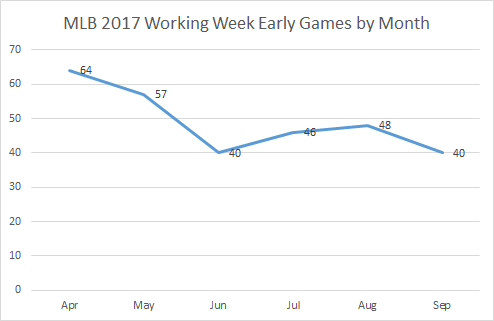 June is always a bit of a let-down after the first two months and looks even smaller in comparison to July when you consider that the best part of one week during that month is taken up by the All-Star Break.

However, even in June and September the total still averages out at 10 early games per working week. When you add on the early weekend games – and the fact that MLB.TV subscribers can watch back games ‘as live’ whenever they like to catch any night games – that still makes for plenty to watch.

The top team for working-week early games in 2017 was the team that always comes out on top.

The Cubs play more home games in the afternoon than any other team due to restrictions on floodlit night-games at Wrigley Field.Â  However, they normally lead this list by a good margin, yet this time Cleveland ran them close (and worth taking a second to appreciate that we got watch the 2016 World Series participants so much this season).

Whether this was just one-off (perhaps linked to them being reigning World Series champs) or the new normal following renovations at Wrigley Field will be something to keep an eye on in 2018.

You’ll note that five of the seven teams listed all play in one of the two Central divisions, with the other two based in the West.Â  The first East division team were the rebuilding Philadelphia Phillies, who were involved in 24 working-week early games.

At the other end of the scale we have a familiar bunch of teams.

The two teams based in LA, teams in the Eastern divisions and Texas usually can be found in the group that play the least amount of working-week early games.Â  There are established reasons for this, for example the oppressive mid-day heat in Arlington, Texas means that fewer home day-games tend to be played by the Rangers.

Their current ballpark does not have a retractable roof to moderate the temperature; however their new ballpark (provisionally scheduled to open in 2020) will do so this may see a slight increase in day-games in future.

Here’s the table of total number of working-week day-games for all 30 MLB teams in the 2017 regular season.

If you’re new to MLB and haven’t yet picked a team then looking at the number of day-games they tend to play in a season might well be something to factor in to your decision.

For example, UK-based fans of Texas this year got to watch their team at a convenient hour during the working-week less than a third of the occasions that fans of the Cubs and Indians did for their respective teams.Â  If you’re happy to catch up on games later on or watch them live in the early hours then no need to worry, but if you really want to watch as many games as possible live during the British evening then that’s a significant difference to take into account.

A Boone for the Yankees