The road to Thursday 29th March and the Oakland A’s regular season opener against the LA Angels begins on Friday with a Spring Training game against the Angels.

We’ve not heard yet who will be playing in the opener, but in some respects that doesn’t really matter.

What matters is the A’s will be back out on the field and we can officially say goodbye to the winter and get back into the baseball swing of things.

Things to look out for in Spring

Given where the A’s are in their rebuilding plans, it’s no surprise that exciting new recruits are thin on the ground.

Stephen Piscotty is the most prominent off-season addition and I’m looking forward to seeing him in the green and gold.Â  Much as I’m trying to temper my ethusiasm, I have this hunch that he’s going to prove to be an inspired pick-up and quickly become a fan favourite.Â  This time last year he was one of the more intriguing young players in the Majors, not primed to be an MVP candidate or anything but someone who looked like being a core player with the Cardinals for years to come.

We all know 2017 was a tough year for Piscotty, both on and off the field, and the 2018 season will show us if that was a blip or if teams have made adjustments to him that he can’t find a way to adjust back to. I’m betting that he’ll settle in quickly and be just fine.

Other than that, we’ve got some new relievers to take a look at and some of the youngsters, especially early on this spring.

Dustin Fowler’s progress from knee surgery all sounds positive and fingers are firmly crossed that he comes through spring with no issues, as I suspect he’ll be the Opening Day start in centre field if so.Â  Jorge Mateo – another of the Sonny Gray return from the Yankees – has a slight knee injury but it wasn’t expected that he would head to Oakland with the club at the end of spring anyway.Â  He will get some work in, hopefully impressive Bob Melvin and the coaching staff along the way, then head to Nashville with Franklin Barreto to start the season in Triple-A.

The main performances to look out for concern the gaggle of arms that are competing for spots in the starting rotation.

“Typically we’re not that big on Spring Training performances because they can fool you some,” A’s manager Bob Melvin said. “I even had great springs. I hit .300. Then there are other times when that’s all you have to go on.”

Whilst Kendall Graveman and Sean Manaea look certainties to be in the rotation, the oher three spots are all up for grabs and currently there doesn’t seem much to separate most of them other than how they look in spring.Â  Regardless, we’ll likely see all of the current contenders pitching in Oakland at some point this season. 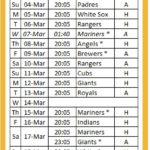 From Friday there are only two days, 2 and 14 March, on which the A’s are not playing a game until the day before the MLB season begins.

The A’s have 29 Spring Training games, plus the traditional three-game series against the Giants, and the vast majority of them are a 20:05 UK time first pitch.

Currently nine of the A’s Cactus League games, and the three Giants games, are scheduled to be broadcast on MLB.TV.Â  All of the rest will be available to listen to via radio coverage on MLB.TV or MLB At Bat.

A full schedule can be found by clicking on the image above.

We found out yesterday that the A’s 2019 Spring Training will be a bit different as Susan Slusser reported that the team will be opening the MLB season in Japan with the Seattle Mariners.

The @sfchronicle has learned the A’s will open 2019 season in Tokyo against Seattle, third opener in Japan in 12 years for Oakland: https://t.co/R24JXSBYlH via @sfchronicle

In the previous two times the A’s started in Japan, the games were at the end of March (28th and 29th in 2012) and so the team’s Spring Training was shortened to accomodate the travel.

The slightly disappointing part to the news is that it confirms that the A’s will not be one of the teams heading to London next year for the eagerly anticipated UK series; however, that was always likely to involve east division teams so it wasn’t expected that Oakland would be heading across the pond anyway.

The good news is that the games in Japan played by the A’s previously took place at 10 or 11 am in the morning UK time, so although you need to plan to be off work those days, it does mean the games are at a very convenient time for us.

And it gives US-based fans a chance to live the UK experience by watching games in the early hours of the morning!

No dates have been announced as yet, in fact no details are official at this point although you can count on Susan to have the facts, but it will be something else to look forward to for March 2019.

But let’s not wish away 2018 just yet.Â  We may not be expecting a play-off push this year, but there’s still going to be plenty to enjoy, not least watching and listening to our A’s simply being back out on the field again on Friday.