Thank You For The A’s: Money and Snow

People always like to talk about money, especially when it’s not their own.

Even tales of snow woes this week have often included the cost of accidents, insurance claims, loss of trade and the like.

Money has been an especially hot topic over the past couple of months in MLB, namely how teams are not spending it.

That came to a head this week with the MLB Players Association filing a grievance against the Miami Marlins, Oakland A’s, Pittsburgh Pirates and Tampa Bay Rays for failing to spend the revenue-sharing dollars they receive appropriately.

Revenue sharing essentially involves a pooled pot of money being shared out to the smaller market teams to help them be competitive and, in theory, creating a more exciting MLB for the good of all.Â  The money has to be used by the clubs that receive it “in an effort to improve its performance on the field”, so that it can’t just be siphoned off to cover other debts or to line the owners’ pockets.

MLB and the respective clubs have dismissed the claims and are adamant all is above board.

For the A’s, having the finger pointed at them brings into sharp focus that such accusations will soon be a thing of the past.Â  Not necessarily because they’ll be spending more money, but that they won’t have revenue-sharing funds to spend at all.

The 2011-2016 Collective Bargaining Agreement changed revenue-sharing by gradually eliminating such payments to the top 15 teams based on their market size.Â  The A’s technically should have been among them, yet it was recognised that the Coliseum situation (an old multi-purpose stadium) restricted their ability to generate more revenue themselves (especially via corporate/higher-priced seating etc) and so they were temporarily taken out of the equation.

It was temporary in the sense that the 2011 CBA stated that the A’s would no longer be exempt once they opened a new ballpark.Â  Without wishing to be too cynical, that the A’s went through the period of that CBA without building a new ballpark would seem more than a mere coincidence. Revenue sharing was reportedly worth $35m to the A’s in 2016 and, even in MLB’s landscape, that’s a fair chunk of money to give up.Â  It’s also no coincidence that the A’s took that stance at a time when other MLB owners were thwarting former part-owner Lew Wolff’s plan to move the team to San Jose.

Don’t let us go and we’ll keep pocketing the dough.

The rest of the MLB owners cottoned on to this and the result was the A’s being singled out in the 2017-2022 CBA to be stripped gradually of their revenue sharing funds.Â  That’s one of the reasons why the A’s President Dave Kaval – who has been hugely impressive with his openness and attitude since being appointed in November 2016 – has continued to stress the target of moving into a new ballpark by 2023.

In short, the A’s will be stuffed if they don’t.

Things were finally looking positive when the A’s announced Laney College as their preferred site last September, only for that to hit a seemingly terminal blow in December. It seems more and more like the most practical answer ultimately will be to build a new ballpark on the existing site, with the Oakland Raiders heading to Las Vegas within 2 years and no longer being a factor.

The new stadium saga has rumbled on for so long that in many ways the revenue-sharing cliff edge is welcome; it’s forcing everyone involved to quicken their pace.Â  However, there are lots of challenges ahead in getting a new privately-financed ballpark built.Â  We can only hope there is good progress over the next year. Otherwise the young core the A’s are building could coincide with a 2021-2022 period in which revenue-sharing is significantly reducing amid planning for the prospect that 2023 will arrive with no revenue-sharing funds and no new ballpark to generate additional revenue to replace it.

Representing the A’s in the UK

A new baseball season is a good excuse to freshen up your wardrobe, so I picked up a couple of discounted A’s t-shirts recently. 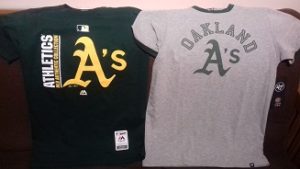 It won’t make much of a dent in the A’s revenue plans, but every little helps, I guess.

It’s definitely not been t-shirt weather in the UK this week.Â  On Wednesday evening I was wrapped up in a blanket listening to part of the A’s Spring Training game against the Chicago Cubs with a good 6-7 inches of snow outside. Julian McWilliams, the new A’s beat writer at The Athletic, summed up the encounter by stating “It’s cold”.

Even colder than you thought for some A’s fans, Julian.

MLB.com published their Top 10 Farm System rankings on Friday and the A’s were listed at number 7.

Five of the A’s top 11 prospects on MLB.com’s list were acquired last summer when trading away Sonny Gray to the Yankees and Sean Doolittle and Ryan Madson to the Nationals.

Sheldon Neuse, at number 11 on the A’s list, was drafted in the second round in 2016 by Washington and has garnered plenty of praise in the first week of Spring Training games.Â  He’s been getting playing time at third base due to the injuries to Matt Chapman and Renato Nunez and, whilst he’s still on course to head to the Minor Leagues this season, he’s done exactly what a young player wants to do: make a good impression.

It’s been tough on Nunez as he was the main name heading into Spring Training that there was a question mark against, as he is out of Minor League options so either must make the A’s Opening Day roster or be made available to other teams by being placed on waivers.Â  Even if there didn’t turn out to be a place for him with the A’s, a good spring might have given him some better opportunities elsewhere.Â  His hamstring injury has put him on the sidelines at an inopportune time, although Melissa Lockard explained previously that this might give the A’s more time to make a decision on his future:

If Renato Nunez’s hamstrung strain keeps him out for much of the spring, the A’s could DL him to start the year and that would give him at least a month of rehab games in Triple-A before they’d have to 25-man roster him.

Fosse on the warpath

A’s broadcaster Ray Fosse – fully paid-up member of the catchers’ union – is not a fan of the new rules that limit the number of pitching mound visits in a game to six (excluding pitching changes and injuries).

Kendall Graveman struggled in his start against the Cubs on Saturday and Fosse picked up the uncertainty as to whether catch Bruce Maxwell should go out to the mound or not.

I have a feeling it will be a hobby horse for Fosse all season long.