Everyone’s focus is mainly on club baseball at this time of year, with Major League Baseball’s Opening Day soon to be upon us and British teams playing friendlies as the gear up for the start of the domestic season in early April.

However, some significant international baseball (and softball) news has just been announced. The World Baseball Softball Confederation (WBSC) has confirmed the qualification process for the 2020 Olympics.

Baseball and softball were last in the Olympics in 2008 and they’ve been given another chance by virtue of their popularity in the host nation, Japan. 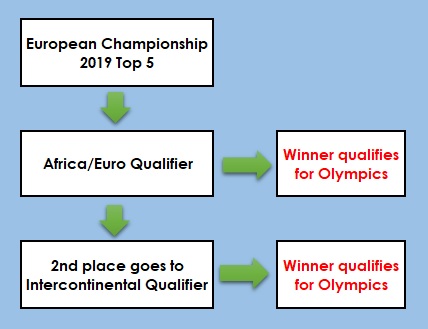 ls can be found in the news article on the WBSC website.Â  Our focus is of course on Great Britain and the potential route to an Olympic appearance for European teams.

So that’s the route the European teams will need to navigate to get to Tokyo 2020.Â  If we look at the standings from the last five European Championships we’ll see who the favourites to get through to the Africa/Euro Qualifier will be.

The same five teams have been in the top five in the past three Euros: Netherlands, Italy, Spain, Germany and the Czech Republic.Â  Something disastrous would have to happen for the first two not to make it.Â  Spain had a blip in 2010, but you would expect them to at least be best of the rest and Germany haven’t been out of the top five during that period.Â  The Czech Republic have really raised their levels over the past 10-15 years and they’ve got three consecutive top five finishes against their name.

All of which shows the rest of the teams are going to have to go some to knock the existing top five out of Olympic contention.

Great Britain haven’t been too close to the top five in recent years so there is plenty of work to do, yet the outstanding silver medal from 2007 shows that it is possible for a team to have a great tournament and upset the odds.Â  Liam Carroll’s team will be aiming to do just that in Germany next year.