Thank You For The A’s: New Season Excitement, but Bad Luck with Puk

The time difference between the UK and US creates a unique experience in following MLB from these shores.

With many games being played in the early hours for us, breakfast time during the baseball season takes on an added dimension. The tone of your day ahead is set by what appears on your phone/tablet/laptop as you sit down with your cereal and wait for MLB.com to load up on your chosen team’s page.

Yesterday morning I checked MLB At Bat and thought about the daily rollercoaster of emotions that was about to begin.Â  I didn’t expect that rollercoaster to set off this morning though.

There it was staring straight at me: “TJ surgery recommended for top prospect Puk”.Â  The shining light during Spring Training, the pitcher we were looking forward to following his progress in Triple-A before a mid-season (or earlier) call-up to the Big Leagues, a potential ace for us to be proud of.

What a way to ruin your cornflakes.

A.J., we hardly knew ye but we had placed our hopes on you as intently as a pigeon sits waiting for a chip to fall to the floor. We’ve had slim pickings for several years now and you offered the potential for something that us A’s fans don’t get to experience all that much: a young pitcher that fans of other teams wish was on theirs.

You weren’t going to be on the Opening Day roster and you were unlikely to lead us to the play-offs this year. In some ways, if your arm was going to give out then better now than in two years’ time when you’d settled into the Big Leagues and had a potential play-off team around you. If you make a full recovery, who knows, maybe you’ll be a bullpen weapon as the A’s make a play-off charge next September before starring in the rotation in 2020?

All is far from lost, but at a time of the year when everything should be filled with optimism and positivity, this news is like being presented with a cake and then someone comes along and takes the chocolate icing bits off it.Â  It’s still a lovely cake to enjoy, yet you’ll enjoy it knowing that it could have been even tastier.

I’ve said before that the A’s season will come down to how the rotation supports an improved bullpen and very promising batting line-up and that’s coming even more sharply into focus.

Puk looks to be following Jharel Cotton to the operating theatre for Tommy John surgery and Paul Blackburn’s forearm strain seems ominous too. We entered Spring Training with a battle for starting rotation spots and hopes that a few players would put their hand up to grab a place. We’ve ended up with a rotation based on whose arms are physically able to allow them to put their hand up.

I jest, of course, as Kendall Graveman, Sean Manaea, Daniel Mengden, Andrew Triggs and Daniel Gossett all have talent and now is the time for them to show it. Trevor Cahill and Brett Anderson are waiting in the wings – and wouldn’t it be a great story if they are able to stay healthy and become effective A’s starters once again – so there is a bit of depth there, albeit not depth that comes with any guarantees.

The main position player decision still to be made is in centre field. Reading between the lines I get the impression that whilst the A’s ultimately see Dustin Fowler as the centre fielder, it may make sense to start him in Triple-A after the long lay-off from knee surgery last summer. That would give Boog Powell a chance to show what he can do out there, with Jake Smolinski a right-handed bench option who appears to be something of a favourite of Bob Melvin. 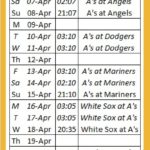 It all gets going on Thursday at the wonderfully UK-friendly time of 21.05.Â  The LA Angels are in town for a four-game series, with Shohei Ohtani scheduled to make his Major League debut (on the mound, at least) on Sunday.

Kendall Graveman will get the Opening Day assignment against the Angels for the second consecutive year and he did a decent job last time, giving up two runs over six innings.

The games on Saturday and Sunday are day-games too so the season will begin in a very convenient fashion for us.Â  Even the night-game on Friday is a bit more manageable than usual coming in the early hours of Saturday as part of the Easter weekend.

Despite our pitcher injury woes and modest expectations for 2018, nothing can dull the excitement of a new season and the adventure we’re going to go on together over the next 162 games with the A’s.Â  I’ll be blogging about it all season long and commenting on Twitter via my usual account and at the A’s UK fan account @OaklandAUK.