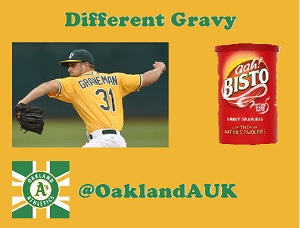 As I’ve got the day off work and can’t think of anything but baseball, I thought I’d do something vaguely useful with my time and look ahead to the A’s opener tonight at 21:05 BST.

After inheriting the Opening Day assignment in 2017 due to Sonny Gray being ill, Graveman will take the mound this time as the A’s nominal ace.

I say nominal ace as even the most optimistic A’s fan wouldn’t really put him in the ace bracket, but he’s the leading starting pitcher among our current crop alongside Friday’s starter Sean Manaea.

Looking back at his Opening Day start a year ago, Graveman did a decent job in limiting the Angels to 2 runs over 6 innings.Â  He did that throwing his sinker almost exclusively. There were a few cut fastballs thrown in here and there, yet otherwise it was sinker, sinker, sinker.

Athough he does throw his sinker a lot, that was a bit extreme, perhaps with him not quite having a feel for his change and curve in his first start, and more generally over the 2017 season this was his pitch breakdown according to Brooks Baseball:

As with most pitchers, the overall numbers obscure the different approaches taken against right or left-handed hitters.Â  Against righties he went to the sinker almost 80% of the time, then 10% cutter, 10% curve (very occasionally chucking a change into the mix). Against lefties, he significantly increased his cutter (23%) and change-up (22%) usage, bringing his sinker use down to approximately 50% and then throwing a few curves in here and there.

The Baseball Savant website does a great job of visualising how a pitcher has approached different hitters and the outcomes of that.Â  Here’s a link to the page for Graveman’s work against the Angels.

The starting line-up hasn’t been announced at time of writing. The A’s are facing right-hander Garrett Richards and faced a righty (Chris Stratton) in their final exhibition game on Tuesday, so if we use that as a guide then it would be:

I suspect Jonathon Lucroy will be in the line-up instead of Maxwell, but we’ll find out soon enough.

The game is scheduled to begin at 21:05 BST and is available to watch online for MLB.TV subscribers. Join myself and the rest of the OaklandAUK fanbase on Twitter tonight.