With Rodney, these A’s are no Plonkers

Sunday’s series finale against the Los Angeles Angels felt like it had more riding on it than an early-to-mid-August match-up normally would.

You don’t need me to tell you that this is a huge week for the A’s, with the Seattle Mariners and Houston Astros coming to the Coliseum.

With the Mariners staging their own heroics by sweeping a four-game series against the Astros in dramatic extra-innings style, winning Game Three to win the series 2-1 in Anaheim ensures that Oakland should have plenty of confidence too.

Before the Angels series began the A’s added yet another reliever to the ranks in the form of veteran Fernando Rodney.

It’s fair to say Rodney is not exactly a darling of the stat-crowd as for years now he has been a reliever who has often been given save opportunities despite his peripheral stats suggesting that he’s walking a tightrope most of the time.Â  I’ve often thrown in the odd Only Fools and Horses reference when his name has come up too, as it wouldn’t only be Del Boy who would be moved to shout ‘Rodney, you plonker’ in his direction at various points in his career.

But somehow everything all looks a bit different when a player puts on the Green and Gold. 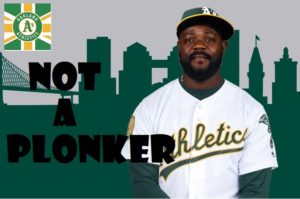 His quirks – cap at an angle, bow-and-arrow celebration etc – are endearing rather than potentially annoying (although I’ve always liked that about him, largely as it runs counter to the buttoned-down, ‘play the game the right way’ nonsense that dictates players shouldn’t show their personalities once in a while) and as he’s likely to be used in lower-leverage situations than he has been at other teams he should be a useful addition to the crew.

Here’s my series sheet. Rodney made a couple of decent appearances, the second coming as part of a six-man effort on Sunday.

Bullpenning has become a popular tactic in the play-offs over the past few seasons. The A’s are looking like they will use a version of that approach for the final two months of the regular season too.

The A’s bullpen doesn’t have any obvious weak links now, albeit Ryan Buchter has been a bit up-and-down as the lone lefty. The only weakness may be the temptation for Bob Melvin to rely too heavily on them.Â  As always, it’s up to the starting pitchers to convince the manager that they can be trusted to go deeper into games more often.

There were plenty of good points in the series for the A’s, yet none that could match the catch-and-throw piece of wizardry by centrefielder Ramon Laureano in Game Two.

Often the best things that happen in sport are when a player puts convention to one side and dares to have a go at something that could backfire. Laureano knew full well that the ‘correct’ play at that point was to hit the cut-off man, but his instincts led him to take a chance and it resulted in a moment of magic.

You know you’ve seen something good when the commentators can’t help but laugh, and Dallas Braden’s “oh my god … oh my god” reaction was the cherry on the cake.

Don’t mind us, just watching this for the 1000th time.#RootedInOakland pic.twitter.com/kbCTEKZLUJ

We all get fed up with the endlessly repeating clips during commercial breaks on MLB.TV, but I’m sure Laureano’s throw will be added to their playlist soon enough and I won’t get tired of seeing it however many times they show it.

Meanwhile, the man he replaced on the roster is reacting exactly as we hoped to his demotion.

Dustin Fowler has gone 23-for-44 (.523) over his last 10 games with the Nashville Sounds in Triple-A. He had been struggling for most of the season and, with the A’s doing so well, it had got to the point where Melvin couldn’t justify giving him at-bats, whilst knowing that only getting some pinch-hitting opportunities and the occasional start were not conducive to him finding some form.

Sending him to Nashville so that he could rebuild his confidence was the right call and the early returns are that it’s working out well all-round, with Fowler getting some hits and Laureano making a positive contribution to the Big League team. 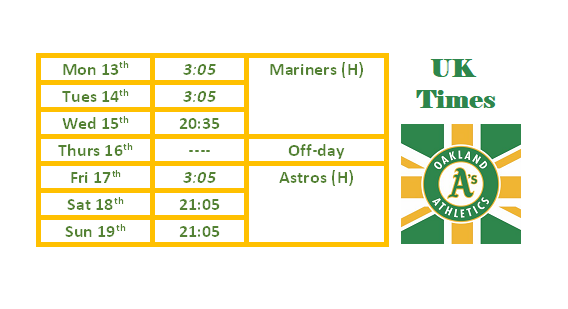 You couldn’t ask for a more exciting week at this time of year. Not only do we have six great games, but three of them are at a convenient time for us to enjoy during the British evening.