This Week in MLB 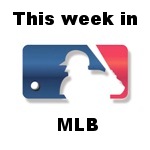 Baseball continued as usual this week, despite MLB’s best efforts to focus our attention on the annual draft instead. Of course the draft is important, but sadly lacks the excitement of other US sports like basketball and football, as it can take years for drafted ball players to even start a major league game, if they’re lucky to make it that far. Still, as expected, the Washington Nationals chose top prospect Stephen Strasburg, a pitcher who many believe will single-handedly turn the struggling franchise around… yep, he’s been hyped up that much. Only time will tell of course, so in the meantime, on with a look at what happened in the big leagues this week.

All eyes were on the Yankees v Red Sox three-game series to decide who would claim top spot in the AL East. The Yankees have been playing well this year, but just can’t seem to get started against Boston who are now an impressive 8-0 against New York. Even Big Papi found the time to hit a couple of homers as he aimed to put his slow start behind him. The Blue Jays are 4.5 games back now but won their series against the Rangers despite a game being postponed. However ace pitcher Roy Halladay exited Friday’s first interleague game against the Marlins with a strained groin during the fourth inning. Tampa Bay continue to hover around the .500 mark, taking a series from the Angels last week, but Baltimore had a less-than stellar week after their recent improving form, swept by Oakland, then losing two of three to the Mariners.

In the NL East, the Phillies continue to play well, stretching their lead over the New York Mets to three games. Raul Ibanez continues his impressive (non-juiced) form with 58 RBIs on the season so far and 21 home runs. With a series victory over the Mets behind them, Philadelphia is entertaining Boston this weekend, then taking a road trip to Toronto. It’ll be a tough set of games for the 2008 World Champions. Meanwhile, the Mets have their famed “subway series” this weekend against the Yankees, and the Atlanta Braves gave long-time manager Bobby Cox his 2000th win on Tuesday night with a 7-6 victory over the Pirates at Turner Field. Florida and Washington continue to drift away from the front runners though as the season progresses.

Detroit continues to stamp their authority on the AL Central with a three game advantage over their closest rivals, though this division still remains tight 60+ games into the season. Always noted for their big bats, it’s been Detroit’s pitching which has been the difference so far this year, with outstanding contributions from Justin Verlander, Rick Porcello, and Edwin Jackson. At the bottom of the division though, things are looking a little different. The Kansas City Royals have disappointed after a bright start and now find themselves near or at the foot of the table, as a resurgent Cleveland Indians continue to climb. Meanwhile, the Minnesota Twins and Chicago White Sox continue to find themselves hovering around the .500 mark ready to pounce should the Tigers falter.

In the NL Central, though Milwaukee lost four on the trot, they still find themselves topping the league. But this is still a super-close race with St Louis just a half game back, and the Cincinnati Reds and Chicago Cubs still in contention. Albert Pujols hit home run number 22 for the year against Cleveland on Saturday afternoon, and though the Cardinals were swept by the resurgent Colorado Rockies 4-0 last weekend, the team recovered somewhat against the Marlins. It’s still a mixed bag for the Reds and Cubs, both hovering around the .500 mark once again, while Pittsburgh and Houston continue to drift. However, the Astros were no doubt excited to see Miguel Tejada get his 2000th big league hit, and Lance Berkman smack home run number 300 in the same game on Saturday.

Heading out to the AL West, the Texas Rangers were disappointed to learn that star hitter Josh Hamilton will be out for 4-6 weeks due to surgery to repair a partially torn abdominal muscle. Hamilton injured himself making a spectacular catch on May 17 against the Angels, and his numbers suffered as he tried to play through the pain. But even without him, Texas still leads the division by four games, as both the Seattle Mariners and Los Angeles Angels of Anaheim keep in contention with .500 records. The Oakland A’s return to form continues, though their winning streak was halted at seven when they tied a four game series with Minnesota.

Finally, we’ll round things up with the NL West. While the Los Angeles Dodgers continue to top the division with an MLB-best 40-22, runs have been harder to come by lately, but LA still hasn’t lost more than two games in a row all season so far. Recently though, all eyes have been focused on the surging Colorado Rockies who have won ten games on the trot. The Rockies improved to 30-32, but still find themselves 10 games back. Nevertheless, that’s quite an improvement for a franchise that was struggling all through April and May. Meanwhile, the San Diego Padres will have to face a month without ace pitcher Jake Peavy after he was sidelined with an ankle injury.

Well, that wraps up another eventful week in the MLB. Back next week with more news from the Majors.

Marty is a Brit who lives in Chicago, IL. Nowadays, he's not only an avid Twins fan, but also loves the game of baseball with a passion, embracing both its culture and history.

Baseball fights for its Olympic future today in Lausanne