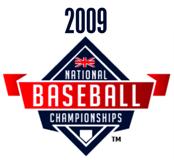 It’s the biggest weekend in the British baseball calendar.Â  Three of the four National Baseball Championships will be held at Roundshaw Fields in Croydon on Saturday and Sunday.Â  The 2009 champions of the National Baseball League, Double-A and Single-A Leagues will be crowned at the end of two days of great baseball action, with the Triple-A NBC taking place in a week’s time in Harrogate.Â

The 2009 National Baseball League NBC, the top level of playÂ in Britain,Â promises to provide one of the most exciting climaxes to a British baseball season for several years.Â  Although the Croydon Pirates suffered a win-less season, the other four teams were evenly-matched and all have a genuine chance of capturing the NBC title.Â

Joe has written an excellent previewÂ to the National Baseball League NBC for Mister-Baseball.com.Â  As he states, Richmond Flames have to be considered the favourites after topping the regular season table and with the London Mets missing some key players this weekend.Â  However, the Mets should definitely not be discounted and both Bracknell Blazers and Herts Falcons are more than in with a shout as well.Â  The NBC will be played under the new ‘double elimination’ format, which should produce six meaningful and tense gamesÂ and lead to some tactical decisions on which pitchers each team decides to use in each contest.

The final entrants for this year’s NBC’s were confirmed after ‘playoff Sunday’ last week.Â  Only four of the six playoff games were actually played.Â  Halton Jaguars forfeited their game against Kent Mariners, while the MK Bucks “awarded their place” to Humber Pilots for an unspecified reason.

The Mariners will be joined in the Double-A NBC by the Mildenhall Bulldogs, who booked their place with a 9-3 home win over Brentwood Stags.Â  The Bulldogs will face the Manchester A’s in what amounts to the semi-final stage, with their fellow Midlands League United States Air Force team Alconbury Braves taking on the Mariners.Â  Those games are played on Saturday before the third-placed game and final on Sunday.

Leicester Blue Sox, Bracknell Blazers II and Essex Archers were all victorious in their Single-A League playoff games and they will compete in the NBC alongside Humber Pilots.Â  The Blue Sox inflicted a heavy 29-9 defeat on Bolton Robots of Doom, while the Blazers and Archers also ran out comfortable victors against Guildford Mavericks (17-7) and Richmond Dragons (16-4) respectively.Â  The Single-A NBC will be played under the same semi-final/final format as used in Double-A.Â  In the semis, the Blue Sox face Blazers II while Humber Pilots will look to send the Arrows to their first defeat of the 2009 season.

A greatÂ weekend of baseball in prospect

If all games can be played, there will beÂ fourteen contests to enjoy on two diamondsÂ over Saturday and Sunday.Â  Why not spend part of your Bank Holiday weekend enjoying some of the action at Roundshaw.Â  Head over toÂ BaseballSoftballUK.com for more details.

You Are the Scorer: Number 43