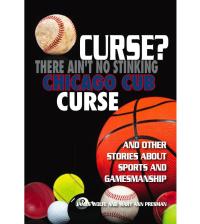 â€˜Curse? There ainâ€™t no stinking Chicago Cubs Curseâ€™ is a collection of eleven â€œstories about sports and gamesmanshipâ€.Â  Four are by James Wolfe, two with a baseball theme and two on golf, and Mary Ann Presman supplies the other seven, exploring relationships and life to a backdrop of â€˜Backyard Bocce Ballâ€™, brothers playing basketball and Scrabble dating evenings among others.

The two baseball-themed stories naturally take precedence in this forum and both are enjoyable reads.

The title story is the most substantial piece in the collection.Â  It tells the tale of a rich businessman called Johnny who decides to buy the Chicago Cubs and gleefully runs the organization with the joint intentions of winning the World Series and making lots of money.Â  He immediately poaches the best manager in the game and throws his cash around like confetti to assemble the best team money can buy; however this comes at a price. Â Cubs fans are able to watch a great team, but they do so at Goldman Sachs Field (the naming rights to Wrigley having been sold to the highest bidder) where advertising billboards take the place of the cherished ivy on the outfield walls and everything, from game tickets to hot dogs, costs a fortune.Â

The common disagreement over ownership of a sports team (spiritual ownership by the fans, legal ownershipÂ by the businessman) takes the ultimate turn when Johnny makes a bold decision based on the bullish logic of the rich and powerful:Â  â€˜If I buy a house, I can live in it.Â  If I buy a car, I can drive it. If I buy a company I can run it, even into bankruptcy. If I buy a major league baseball team, I can play on itâ€™.

The story is told from the wry perspective of Johnnyâ€™s older brother, Frank, who has been charged with turning his siblingâ€™s dreams into reality since they ran a lemonade stand as kids.Â  He provides the foil to Johnnyâ€™s headstrong ways and his organized, matter-of-fact attitude gives you the sense that, yes, he could put his brotherâ€™s plans into action, however outlandish they may be.

Like many good stories, it has a central element of truth to it that draws you in.Â  The dream turned into a nightmare of a rich owner buying up a sports team and doing whatever he wishes has been played out in real life many times before and will be countless times again.Â  Johnnyâ€™s brutal description of the Cubs fans who donâ€™t like his methods, â€œa bunch of malcontent losers who donâ€™t deserve a winning teamâ€, could come from the mouths of plenty of other owners.

By strange coincidence, new owners have recently taken charge of the Chicago Cubs. If you see manager Lou Piniella wearing a pained expression as members of the Ricketts family sit alongside him in the Cubsâ€™ dugout this season, donâ€™t say you werenâ€™t warned.

The other baseball-themed story takes us away from the hard-nosed land of MLB team ownership to the innocence of an eight-year-old Little League pitcher.Â  The first person narrative allows Wolfe to depict the kidâ€™s daydreaming while up on the mound: â€œRats! I walked him. What a chicken. Hmmm, I wonder what Momâ€™s planning for dinner?â€.Â

While he may be reflecting the mannerisms of his hero Mark Buehrle and other Big League pitchers as he stares in at the catcher, heâ€™s not quite as in control as he would like you to believe: â€œIâ€™m not sure, but I think heâ€™s giving me a sign or sumpthinâ€™. Or maybe heâ€™s waving at his momâ€. Reading his thoughts, we recognise the state of trying to be confident and assured on the outside, while having little clue on the inside.Â  Weâ€™ve all been in that situation, although not necessarily up on a pitcherâ€™s mound, and this short story captures that sensation brilliantly in just eight and a half pages.

The non-baseball stories are just as effective and entertaining, highlighting the different ways in which sports and games form a backdrop to life and bring people together.Â  We see the tensions and acting between relatives in â€˜Backyard Bocce Ballâ€™ as the main characterâ€™s older brother brings his new much-younger wife to a family get-together, and the way a fatherâ€™s death lifts a burden from his two sons and brings new light to their relationship while shooting hoops in â€˜H-O-R-S-Eâ€™. Â And youâ€™re guaranteed to squirm along to â€˜Straight Shooterâ€™, as a thirteen year old girl is given a sex education lesson by her grandfather at the pool hall (â€œLucy was glad it was dark in here â€“ she was sure her face was bright red. Sheâ€™d never heard Grandpa Craig talk like thisâ€).

Itâ€™s not strictly a baseball book, but the two baseball tales give me an excuse to review it here. Wolfe and Presmanâ€™s styles mesh together well and the overall mix of characters and settings makes this collection enjoyable to read from cover-to-cover, or to dip into one story at a time.

Have you read â€œCurse? There ainâ€™t no stinking Chicago Cubs Curseâ€? Feel free to share your thoughts in the comments section below. Can you recommend any other similar books? If so, let us know.