Book Review. Philadelphia Phillies: Past and Present by Rich Westcott 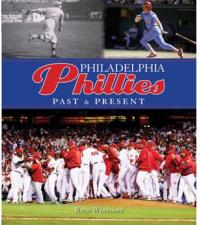 The Philadelphia Phillies are in a golden patch of their history having made both of the last two World Series, winning the 2008 edition and putting up a valiant fight against the New York Yankees last year.Â  And with starting ace Roy Halladay joining the team over the offseason, thereâ€™s every chance that they will make it three Fall Classics in a row in 2010.Â  That makes it the perfect time to learn more about this historic organization.

The Philadelphia Phillies are the latest team to be covered in MVP Booksâ€™ Past and Present series.Â  It follows the standard and successful format of a large, hard-back, coffee table style book that is full of great photos and plenty of text that together offers an informative and vivid history of the team.Â  This is split into a range of chapters and short sections that means the book lends itself well to browsing.Â  You can enjoy the book either by sitting and reading different sections or simply by flicking through the pages and gazing at the photos.Â

The book on the Minnesota Twins, reviewed recently, takes a chorological approach and is more comprehensive than the â€˜Past and Presentâ€™ offerings, such as this Phillies book.Â  That format suited the Twins because they are a relatively young franchise.Â  They have only been in Minnesota since 1961 and their previous life in Washington as the Senators (from 1901 to 1960) is not really seen as part of the franchiseâ€™s history in the same way that, for example, the Dodgers and Giants pool their history from time spent on both coasts of America.Â  For a team like the Phillies, who have been around since 1883 (initially as the Quakers), a chronological approach may well have left the reader â€˜bogged downâ€™ in details.Â  The more selective, themed approach avoids this.Â

One of the common sections across the Past and Present series charts the organizationâ€™s lineage at each position, from catchers to relief pitchers. Â It always works well because it gives you a different take on the players who have represented the team and it allows for some interesting comparisons, especially when looking at the photographs.Â  The chapter on Third Basemen is a good example from the Phillies book.Â  It begins with a posed studio photo of Joe Mulvey, from 1887, catching a ball bare-handed while sporting a stripy cap and an impressive moustache.Â  As you glance through the other photos, itâ€™s great to see how baseball uniforms have largely stayed the same over the years.Â  There are action shots of Mike Schmidt charging after a ball and Pedro Feliz in mid-air firing a throw across the diamond, and the text offers enough detail to give you a decent overview of every player mentioned.

On top of the position-by-position chapters, notable players from the Phillies franchise are documented in themed sections such as Home Run Kings and Defensive Standouts.Â  It struck me that aside from several standout players (Schmidt, Steve Carlton, Pete Rose etc) and the current crop of Phillies, quite a lot of players featured are not particularly big names and many were guys I had either only heard/read passing references to previously, or did not know at all.Â  That shouldnâ€™t be taken as a criticism though as this made it all the more rewarding to find out about some of these players for the first time.

The fact that the Phillies donâ€™t have such a long line of star names as some other teams do is reflected by their relatively modest haul of pennants and championships.Â  They hold the dubious distinction of being the first professional North American sports team to record 10,000 losses and their World Series win in 2008 was only the second of their long history, the other coming in 1980.Â  Philly fans certainly earned the right to celebrate those wins and their other triumphs, such as the 1950 National League pennant by the so-called Whiz Kids team, and that shines through in Rich Westcottâ€™s writing.Â

As always, the Ballparks section is one of my favourites.Â  The many photos tell a great story of how ballparks have changed over the years; from the early days of Recreation Park, Baker Bowl and Shibe Park (one photo of the later includes the dimensions of the field, such as the 468 feet distanceÂ to dead-centre), to the octagonal Veterans Stadium and the current picturesque home of Citizens Bank Park.Â  There are plenty of stories surrounding the ballparks, especially at the seemingly cursed Baker Bowl, and these are explored in the accompanying text.

Throughout the years, these ballparks have housed that unique group known as â€˜Philadelphia sports fansâ€™ and thereâ€™s an entertaining section about the locals.Â  As Wesctott states: â€œPhillies fans are among the most knowledgeable and avid fans in the land, and theyâ€™ve never had any reservations about making that point obvious.Â  This is a group that doesnâ€™t hesitate to vent its feelingsâ€.Â  Some of the booing (of their own players), boozing and brawling might not go down well with everybody, but you can never criticise them for a lack of passion: â€œno casual, sleepy-eyed, leave-in-the-seventh-inning fans are these. Phils fans know exactly what is going on, and they react accordinglyâ€.

The Phillies are a blue-collar team representing a blue-collar city and that spirit is central to â€˜Philadelphia Phillies: Past and Presentâ€™.Â  They have not been blessed with a vast array of stars and a glittering history of success, but theyâ€™ve more than had their moments and have retained a unique passion throughout.Â  Neatly put into the â€˜Past and Presentâ€™ format, they make for a very interest subject in anotherÂ impressive team-specific book.

Have you read â€œPhiladelphia Phillies: Past and Presentâ€? Feel free to share your thoughts in the comments section below. Can you recommend any other similar books? If so, let us know