The Man With The Weight Of Great Britain On His Shoulders 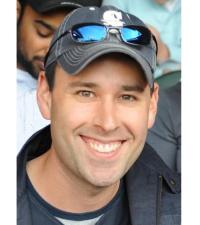 Not many managers of national sports teams have to worry about how to raise the money so that their team can travel to a majorÂ internationalÂ tournament.Â Â It is certainly not something that would keep Fabio Capello up at night.

However this is one of the many things that Jason Greenberg, the new General Manager for the Great Britain Senior Baseball team, has to contend with.Â  He recently spent some time talking to BaseballGB about the challenges and opportunities thatÂ are on the horizon forÂ the British national team.Â  See theÂ end of this post to listen to theÂ full audio of the 25-minuteÂ interview.

Jason is a lifelong Mariners fan who recently took over the GB General Manager post.Â  He has always had a passion for baseball. His early boyhood life in Seattle was spent playing baseball and eating Big League Chew and this experience has stayed with him ever since.Â  AsÂ Jason explains, â€œI never forget playing Little League. The Little League complex [in the States], that is the thing I am most jealous of … that is the biggest difference between baseball there and what it could be here.â€

Taking over from Alan Smith asÂ the Team GB General Manager was always going to be a challenge, even if it was just working with the off-field politics that can surround the national team, but the biggest challenge of all is funding. As Jason explains, â€œImagine how successful the Yankees or Red Sox would be if they were not sure where the money is coming from?â€ The national team gets no money from the UK government and that means the team has to raise all the money itself via donations and sponsorship.

TheÂ British team have several ideas on how theyÂ canÂ start to combat the lack of funding, with Jason noting that â€œthe cogs are turning. There are lots people concerned about funding issues, not just in the lead up to the European championships but in the long term”.Â  Fans can now make their ownÂ donations to the cause and the team are also looking for any innovative fund-raisingÂ ideas fans may have.

Goals for the future

Getting to the European BaseballÂ Championships in Germany later this year and achieving a high placement is an important short-term goal for the senior team.Â  Building on the 2007 silver medal is aÂ sizeableÂ target in itself, but potentially there is an even bigger prize to play for.Â  It is very likely that theÂ World Baseball Classic, fully funded by MLB,Â will expand to 24 teams for the 2013 edition. Britain currently sit 21st in the IBAF world rankings and a good showing in the Euros will give them a decent chance of playing in what is now the most high-profile international baseball tournament in the world.Â  The benefits that this would bring are unparallelled, not simply for those taking part in the eventÂ but the publicity it would generate for British baseball.Â  However, this would only be a possibility if a competitive and well-prepared team can travel to Germany and they need to raise Â£30,000 to make this happen.

Still, Jason is positive for the future, particularly when it comes to the advances that are being made with youth coaching in Britain. â€œI am impressed with guys who coach the cadet and junior teams … the players have been guided very well … We have got a good farm system that will feed into the senior team.â€

And for all the off-field challengesÂ that he faces as GM,Â Jason is relishing the role because he recognises what all the hard work is truly for: â€œBaseball, we all have to remember, is about what is played between the foul lines.â€

Listen to the full interview with Jason Greenberg

Please let us know what you thought of the interview. Is this something you want to see more of at BaseballGB?

BaseballGB thanks Jason Greenberg for his time in conducting the interview.

[…] baseball writer Russell Dyas and you can listen to the audio of the 25-minute interview over at baseballgb.co.uk. Among other things, Jason talks about preparations for this summer’s European Championships […]

[…] did a podcast interview with the new general manager of the British National Team, Jason Greenberg. Check it out. He had succeeded Alan Smith, who stepped down at the end of February. His most important job right […]

Jason is doing an amazing job!
Had the pleasure to meet him yesterday and his vision for GB Baseball is awesome…..
Brilliant
DJ