Rob Nelson – or “Nellie” – was a Maverick in the minor leagues and a renegade in British baseball. Now he has a revolutionary idea to reshape Major League Baseball.

In 1975, a 22-year-old southpaw named Robert C Nelson signed with Portland’s Single-A outfit to become a part of the independent team’s pitching crew. Mavericks by both name and nature, the team were said to have “led the league in umpires terrorized, hotel closets filled with empty beer cans and bar fights never started on purpose.” In the bullpen at the Big Bad Mavs’ Civic Stadium, Nellie and the knuckleballer Jim Bouton dreamt up the idea for Big League Chew, which the latter would later refer to as “the only good idea to ever come out of a bullpen.”

If the author of this article had a time machine – and, even more impossibly, if he could play baseball some way above his current drunken-kangaroo talent level – Portland in the mid-70s is what the dials would be set for. New York in 1927, and murderers’ row, would simply have to wait.

Fast forward two decades, and we find Nellie on the pitching staff of the Enfield Spartans in the renegade league led by the Spartans and the London Warriors as a breakaway from the British Baseball Federation.

In the first two seasons of the breakaway league, the Warriors defeated Enfield in the final, but in 1994 the two rivals met at the semi-finals stage. Nellie was brought in to relieve the Spartans’ starter Iain Lanario in the sixth frame, with London holding a 5-2 lead. Nellie checked the Warriors’ run threat as Enfield’s offensive engine was revved up to seize a 6-5 lead in the eighth. A sacrifice bunt by Nellie in the top of the ninth cashed in Oscar Marcelino’s three-bagger to double the margin he had to work with in the bottom of the inning. The Warriors were able to bring the winning run to bat in the final frame, in the form of the power-hitter Oliver Heidecker. Facing men on first and third but with two outs already registered, Nellie bore down to retire the slugger on “a sharp breaking curveball [that] had him completely fooled for strike three and the end of the game,” in the words of a local scribe. 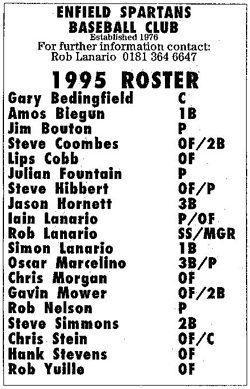 In the final, Enfield faced the Waltham Forest Angels. This time, Nellie was brought in for Lanario in the third inning with their side trailing 5-3. The reliever had excelled in a similar situation against London in the semi-finals, but this time he was going to have to do it with the left side of his face swollen from a wasp sting. (The journalist covering the game was kind enough to resist a reference to Nellie the Elephant Man.)Â Overcoming the effects of the insect’s injection, Nellie shut down the Angels’ offence for the remainder of the contest, and the Spartans rallied for an 8-5 victory.

In the Spartans’ roster (pictured to the right)Â for the 1995 season, which was the team’s first year back playing under the British Baseball Federation’s jurisdiction, Nellie is listed along with his entrepreneurial team-mate from Portland. Unfortunately, the Ball Four author was never able to make the trip across the Atlantic.

Today, Nellie is campaigning for a new minor league team in Portland, as well an extension of the replay system. Oh, and a total overhaul of Major League Baseball’s structure. Here, in his own words, is the idea, which has been given the working title of the “Final Cut” system:

Fewer seats in the new ballparks has produced increased revenues. FewerÂ games will too. It’s the new-look, no-divisions MLB. Here’s how it could work (using the New York Mets as an example team).

The nice thing about this format is that the two or four “rivalry” teams – the ones you play 12 times a season – can be changed if MLB decides that’s a good idea. All you need to do is just do it. No new divisional alignment shifts need take place, because there are no divisions. The NFL has used a “floating” schedule idea for some time now, with great success. Also, the NFL format always has at least one inter-conference game being played each weekend. My MLB format would include at least one inter-league game being played each day of the MLB season.

This is a simple and equitable format that players and fans can easily understand and embrace.

The more observant among you may have already noted that Nellie’s proposal of a 15-team AL and a 15-team NL would necessitate the transfer of one team from the senior circuit to the junior circuit. Nellie has suggested that one way to entice an NL team to move over to the AL would be to give them some AL “plum” teams to play 16 times. For instance, Arizona might be more inclined to move to the AL if that shift meant that the D-backs had 8 home games scheduled against the Yankees or the Red Sox each year.

Nellie drew on insight from a couple of his baseball buddies. One is Rob Neyer, who suggested naming the divisions “First”, “Second”, and “Third”. The other is Steve Kanter, who pushed for the 156-game option based on the “less is more” concept.

BaseballGB would really like to hear your thoughts on Nellie’s proposal. Or maybe you have you own plan for an MLB overhaul. In either case, just drop us a message in the comment box below.

I’m still thinking this one through. I definitely think the currently MLB structure could be improved, not least because the unbalanced schedule can work against teams and that just doesn’t seem like a fair competition to me. Nellie’s idea has its merits, although I’m still of the mind that there’s not much point in having two leagues if you allow teams from each league to meet during the regular season.

For me, taking all of the Final Cut idea, including the wild-card game, but removing the interleague component would be pretty much my ideal system. Also, if it became engrained as the future of MLB it would force the leagues to remain at 30 teams in total in the future (which would be a good thing). MLB would never reduce the total number of sides, despite the guaranteed improvement in average quality, even though they’d happily rob a place like Montreal of a team. But they might one day be tempted to again increase the number of teams, despite the effect this would have on overall standard. This would only really work if an increase in fan interest – presumably what would trigger a further expansion of the league – was backed up by more sustained interest among the kids across all different socioeconomic sections of America.

In terms of MLB buying an idea for such a bid change, I can see how they’d be looking only at the bottom line, and so they could be persuaded to accept the Final Cut concept if it was to lead to increased revenue through increased total attendances and merchandise purchasing – and to do so, it would probably need the interleague component in there.

In an ideal world, though, I’d scrap interleague play for sure.

[…] article on BGB proposing a new MLB structure, â€˜The â€œFinal Cutâ€ system: Nellieâ€™s big league viewâ€™, looked at a topic that is being debated by many right now, as shownÂ by a recent â€˜Game […]