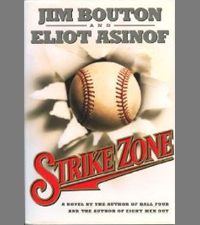 Most of the book reviews on BaseballGB are on non-fiction publications, but we do run the rule over an occasional novel as well. For a classic work, I thoroughly recommend Ring Lardner’sÂ You Know Me Al (at least you won’t feel ripped off, as it retails at just Â£1.25 for a new copy on aÂ website that shares a name with a big river). Among 21st Century publications, I’m still yet to read anything that tops Castro’s Curveball by Tim Wendel. That might be because I haven’t got anything to compare it against yet, but it was definitely an excellent piece of writing (a brief review I wrote on it can be foundÂ here).

Three other novels that come highly recommended by me (and Matt, too, as you can tell from reading his excellent reviews that the following links take you to) are If I Never Get Back by Darryl Brock, Bang the Drum Slowly by Mark Harris, and The Universal Baseball Association by Robert Coover.

Below, I take a look at a work of fiction crafted jointly by two famous names in baseball literature: Jim Bouton (Ball Four)Â and the late Eliot Asinof (Eight Men Out, about the Black Sox game-fixing scandal of 1919).

Right off the bat, this is by no means a literary classic, and ifÂ the subject matter was not baseball,Â I might have found myself dropping it off in a charity shop before finishing the first chapter. (I was in a particularly picky mood, though, as I’d just read The Rider, which is considered to be a classic in the genre of cycling novels. Assuming it has lost something in translation from its original language of Dutch, the native version must be truly remarkable.)

However, Strike Zone was about baseball and so I fouled off a couple of pitches and stayed in the box. And I was very glad I did. The book tells a story running from the evening before a last-day-of-the season Major League pennant decider through to the events immediately following the game. Possession of the first person switches between an ageing knuckleballer, Sam Ward, who is handed an unexpected first career start on the hill in the majors and a soon-to-retire umpire, Ernie Kolacka, who has been forced to fix the game – against Ward’s team, the Chicago Cubs.

The perspective of Ward (written by late-blooming knuckleballer Jim Bouton) and Kolacka (by fix expert Eliot Asinof) are given alternate, seamlessly flowing chapters (or so the reader is led to believe – more on that later). Asinof is remarkably restrained in referring rarely to the subject matter of Eight Men Out, despite this being the most famous fix in baseball. Rather than outline the similarities explicitly – which would have appeared contrived and thus detracted from the escapist experience of reading a good novel – Asinof merely borrows his deductions on the psychology of being involved in such a devious act.

Similarly, Bouton could have used the book purely as an attack on Major League executives and other members of the baseball establishment, in retaliation for his ostracization followingÂ Ball Four. Fortunately, digs of this nature are limited to a mere dusting, and they supplement rather than subtracting from the read. Instead, he draws on his experience as a knuckleballer and his struggle to return to the majors with this pitch. Moreover, Sam Ward’s portion of the narrative is full of the locker-room insight and wit that made Ball Four so wonderful.

After finishing the book I did some web browsing to see what others thought about it (Matt: I wasn’t attempting to bring plagiarism to BaseballGB, honest). I came across an amazing comment on the book, written in response to a post on Baseball Think Factory, following Asinof’s death in 2008:

Asinof’s story aboutÂ Strike ZoneÂ was that he and Bouton were supposed to write alternating chapters â€“ Bouton in the voice of a pitcher, Asinof in the voice of an umpire. Bouton was (said Asinof!) chronically late with his material, and it was inept when it reached the editor. Asinof claimed to have rewritten the entire book himself. He hated Strike Zone, thought it was garbage, resented the need to tack Bouton’s name onto it for sales purposes. I kind of liked Strike Zone, and told Asinof so, but he sneered at the idea.

Next on my baseball fiction readingÂ list Â is Stephen King’s baseball novella Blockade Billy. Thanks to Matt for alerting me to that. Funnily enough, King has also co-authored a baseball book in which he and his collaborator alternate possession of the first person. This is a a non-fiction work and is titled Faithful: Two Boston Red Sox Fans Chronicle the Historic 2004 Season. The subtitle gives the subject matter away, but even if you are not a Red Sox fan this is another book I would thoroughly recommend.

Have you read â€œStrike Zoneâ€ or any other baseball fiction? If so, let us know.Â Feel free to share your thoughts in the comments section below.

Roadrunners become frontrunners in the ALDS

Rays rally against the Rangers, Yankees sweep the Twins

Joe, This is a very prescient review! I’ve just been considering my offseason book review plans and some of the first will include:

Joe:
Thanks so much for your kind words regarding Castro’s Curveball. Good to hear the novel found a home and a fan across the pond.
Tim Wendel

Thanks for stopping by!