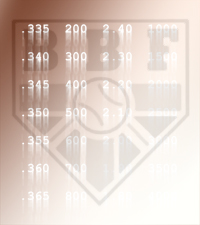 In early 2009 I published a series of articles offering between-season comparisons of batters, pitchers, league quality, and league healthÂ in the British top tier. Later on last year I updated this for the 2009 season, and here I do the same for the season just gone. The big question is how Daniel Williams’s season compares against other top performances in recent years. He did, after all, break the modern records for batting average and on-base average. It is also interesting to find out what impact the expansion of the National Baseball League from five teams to eight teams had on the quality of play and the health of the circuit.

Batting dominance
To seeÂ results for 2001-2008 and the methods read the full article.
Daniel Williams had a gross production average of .541 in 2010 (this is calculated as 0.45*on-base average plus 0.25*slugging average to weight these figures according to their contribution to run production and place them on a scale that can be interpreted like batting average). This gives him a z-score (which quantifies how dominant he was relative to all other hitters in the league) of 2.069. He becomes only the third player since 2001 to top the 2.000 mark, the others being Simon Pole (2.444) and Roddi Liebeneberg (2.146), both back in 2005. Also deserving a mention is Grant Delzoppo, who had a gross production average in 2010 of .464. This equates to a dominance score of 1.508, which is 11th on the 21st Century list.

Pitching dominance
To seeÂ results for 2001-2008 and the methods read the full article.
Despite Jason Roberts’s 15 wins, the 2010 season was unremarkable for rate statistics, and there were no serious challengers to the top-ten list that ranges from Simon Pole’s 2.308 to Adam Lemke’s 1.553. The player closestÂ to displacing Lemke from the list was Henry Collins, who was one of two players with a superior pitching performance to Roberts when assessed using the reduced defence-independent pitching statistic applied in the article linked to above. The other was Matt Gilbert of Essex (despite his earned run average of 9.59 being nearly 7 runs higher than Roberts’s). Both Collins and Gilbert have nurtured their talent in the British league over many years and are proof that it is possible to develop a mastery of the sport in our domestic system.

League health
To seeÂ results for 2003-2008 and the methods read the full article.
League health is calculated on a scale from 0 to 100, where forfeits, blowouts, and generally high run differences in games all subtract from the maximum possible score. These factors are all things likely to put players off staying in the league, and to detract from the interest of any spectators the sport might attract in Britain. Despite several forfeits during the year, 2010 still weighed in slightly above the forfeit-free but blowout-rich season of 2008, the respective scores being 72.8 and 72.6. This season’s score is below the 73.6 of 2009, but the hit taken from a three-team expansion might have been expected to be much worse. The scores for the last three years are all well below the high-water mark of 90.3 set in 2003. Figures for years before 2003 have not been calculated as the necessary data are not readily available.

Texas Rangers run the Yankees out of the playoffs

Hey guys, interesting article, nothing about fielding though 🙁 I had a thought that it’d be good at the end of every season to do like a gold glove team like they do in MLB, from the stats acquired by gbbsa, from what I can see it’d be like

Just a thought because I love fielding stats, what do you guys reckon about that?

Many thanks for the very pertinent comment. I found your line-up very interesting.

Part of the problem of fielding stats is that we only have positional breakdowns from 2008 onwards (this was one of my priorities when I took on the mantle of league statistician in 2008) – which means we cannot look over a wide range of years yet.

That said, I do (quietly) publish fielding awards each year: http://www.gbbsa.org.uk/historical.html#fa

The reason I say quietly is because they are pretty subjective, and I therefore am not able to be as bold about them as I can for batting and pitching awards. In addition, I put serious weight on playing time. So an above-average fielder who mans a position every week may beat a start fielder who plays irregularly at a position, in my book. They are also based on my views of each player’s fielding and that of other followers of the game that I hear and collect (a fan’s assessment, essentially).

Fielding awards need to be subjective because there are many confounding factors and missing information if you look at raw fielding stats. For instance, I feel that pitchers’ fielding stats in a season tell you almost as much about the type of pitcher as about the quality of their fielding, and there is so much luck in whether fielding chances around the mound are easy or difficult, so with a small sample the numbers can be misleading.

Another thing I do differently from what you have presented is to give three outfielder awards, rather than one for each specific position. This is because most of the star outfielders play in centre.

I’m not saying any one approach is right or wrong, but it seemed like a good place to highlight these differences.

Nevertheless, there is overlap on some of our categories. We each cover the catcher and four infielders, plus the centre fielder.

I remember when he stepped in to pitch for the Clippers in our first ever game against the Archers in 2009. Although to be fair he is good.

Adam’s got stats for all the Clippers’ games this season, and with a bit of a ring around I fancy we could come up with something for single-A. Although plate-appearances might be a bit of a limiting factor, as even when we looked at our own records only six of the 18 or so players that represented us over the year had 3.1/game across the season.

(The Clippers are going to have to fold, I’m afraid – not enough players or administrators despite our successful season.)

Sorry to hear about the Clippers’ sudden demise. It’s always a great shame when a new club folds so quickly, particularly one trying to take a different approach to the game.

Good to see that you have quickly found a role at another club, though. It would be really interesting to see the fruits of any efforts to put together league-wide stats. I know that Hamzen was trying to start to get things in shape this year in Single A with stats collection.

Hopefully a new BBF website and a more sophisticated centralized stats collation system will make it easier over the coming years for divisions like Single A to so statistics properly, rather than having all the teams keeping their own stats and not bringing them together for the purpose of comparing players’ performances.

Obviously, any help to this end from yourself or any other like-minded people would be a massive help.

Hi Michael. As Joe stated, it’s a real shame to read that the Clippers have called it a day. I wish you well with the Redbacks

Hi Joe thanks for the comment, yer my team was just quickly thrown together from your stats, I can definitely appreciate that aggressiveness, range and other information has to go into the decision process, I would probably have a totally different outfield if I was to look at it that way.
From watching richmond games this year I have definitely seen an improvement in the quality of fielding this year, not nearly as much errors around the NBL, two standouts where probably carlos diaz when he came to richmond he was picking everything out of the dirt and looked solid over there, and luke foley probably spent most of the time in the dirt, I think he made at least 4 diving stops over a DH and still threw the guy out, heres hopeing we can put a RCF on the list next year 🙂

[…] tier, looking backwards from the 2008 season. Subsequently, I updated this for the 2009 season and for the 2010 season, and here I do the same for the season just gone. Among other things, it will be Â interesting to […]