This is the last of ten posts that have counted down to SABR Day 2011, going through the decades of the 20th Century, backwards from the 1990s. Next Saturday, on SABR Day itself, there will be a special feature on the 1890s,Â which will celebrate the significant link between keeping score and baseball history. This article will be published at 05:00 British time in order to coincide with the start of the day in the time-zone of the Cleveland-based SABR office. To view all the Cobbettes published to date, click here. 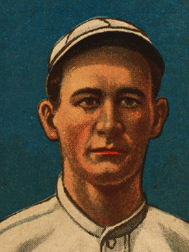 Many people are aware that pro baseball pioneer Harry Wright was born in Sheffield, but there are other less-celebrated names on the list of major leaguers hailing from our “green and pleasant land,” including the wonderfully named Dave Brain (pictured to the right), who came into this world on 24 January 1879 in Hereford. I spent all of my childhood in Herefordshire, and so have a special interest in this player. Interestingly, the surname remains a common one in the area.

According to Brain’s entry on SABR’s Baseball Biography Project, beyond “having one of the more memorable names and birthplaces in the Deadball Era,” there were other notable things about this major leaguer. Biographer Dennis Auger writes that:

“Mired on poor teams for his whole career, Brain was an early home run king with a mediocre batting average (.252 career). Defensively, he was an infielder who could make spectacular plays, but had a penchant for making errors. His major league career spanned only seven years, five as a regular, but in that time he branded his name in the record books for both honorable and notorious feats.”

Brain’s finest achievement came in 1907, when his tally of 10 home runs gave him the outright lead across the major leagues.

“Little is known about his early life, although he appears to have only started playing baseball at the age of 19. Brain’s professional baseball career began with Des Moines of the Western League in 1900 at age 21.”

I would suggest that attempting to find out more about Dave Brain’s early life – including anyÂ activities he engaged in during his time in Britain that might have prepared him for being a baseball player, and when he emigrated to the States – would be a great research project to take on. It will not be easy, but at least this is one of the occasions where British-based researchers have a geographical advantage over their counterparts on the other side of the Atlantic.

Rays and the Red Sox: familiar players in unfamiliar uniforms