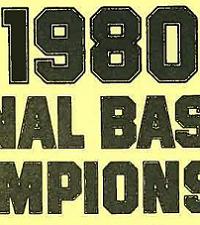 The latest update of Project Cobb’s digital archives has just taken place, with the additions comprising a dozen old programmes and a leaflet. The years of origin of these various items span a range between 1953 and 1997, which illustrates Project Cobb’s dualÂ mission of restoring the historical record of the game’s more distant eras on British shores while not neglecting the need to ensure that more recent years of play are well chronicled.

Many of these were scanned from items donated to Project Cobb by Brad Thompson (of the Golders Green Sox and London Warriors), who has been exceedingly generousÂ in helping Project Cobb, after initially being kindly put inÂ touch by Michael Osborn.

AmongÂ theseÂ new additions areÂ five national championship programmes, but the mostÂ interestingÂ programme of all is probably the one for the game between UK and US all-star teams in 1982. This is a 32-page monster of a programme, packed full of details on British baseball that year. A full listing of the additions is provided below.

If you are able to scan in any programmes not already in the collection, Project Cobb would be very grateful if you could send them through. Leave a comment below with details, and you will be contacted, or email Project Cobb directlyÂ through the address at the top of the digital archives page.

Confirmation that MLB will be on BBC Radio in 2011