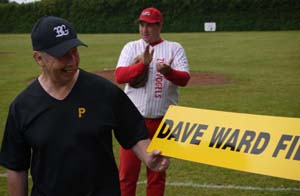 It was a great weekend for long-time Croydon Pirates GM Dave Ward. His first team showed a dramatic turn-around in form to claim back the London Tournament title after a wait of several years, and he was surprised by aÂ ceremonyÂ onÂ Saturday afternoon in which the enclosed diamond at Roundshaw was named Dave Ward Field (thanks must go to former first-team Pirates catcher Andy Kulina for his ability to cut through the often treacherous, swampy ground that is local council politics, and get this on the Sutton agenda).

The move is broadly supported by the local council but must now go through ratification at the next meeting of the relevant committee. However, it is hoped by all that this is nothing more than a formality. And, in any case, whatever the outcome, the ground will from now on be known as Dave Ward Field among the British baseball community. 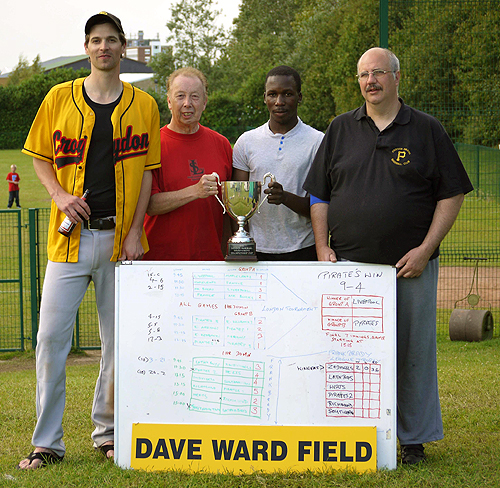 Fittingly, the first home run on the field after the naming ceremony by a current or ex-Pirate, which was hit in the Saturday evening Home Run Derby, came off the bat of Jeff McDonald, the player whose walk-off home run (launched at a similar trajectory) against Brighton in 2005 secured Croydon’s second of back-to-back national championships. McDonald was also at the centre of things a year earlier, when his part-time knuckleball rescued a weary and over-used rotation and earned the Pirates a 12-10 victory over the hotly faniced Windsor Bears in that year’s final. By “part time”, I mean only that it was a weapon infrequently unleashed in competition. There was nothing part time about its efficacy.

Finally, this news officially brings my once regular, then semi-regular, and now all-but-defunct-anyway “Roundshaw Hop” column to an end. “Dave Ward Field Hop” just doesn’t have quite the same ring to it. Roundshaw Hop did go out in a blaze of glory, though, with Harvey Sahker’s 30th Anniversary Yearbook he has just had published for the Croydon Pirates containing this, along with its logo, under the entry for R in the club A to Z.

A very well deserved honour. Glad to see Roundshaw Hop found a place in the Pirates’ history too! I think it definitely falls in the ‘cult column’ bracket.

Big Congratulations to Dave on the organization in the long term. Well Done.

Dave thoroughly deserves this honour – it couldn’t happen to a nicer guy and he has done a fantastic job keeping the Pirates going for so long.

You certainly earned & deserve the recognition ! Your years of service and dedication to the game are note worthy and certainly memorable.

Congratulations & keep up the good work!