There were double-header sweeps, postponements and a no-hitter last Sunday as teams throughout the British baseball community conjured up plenty of news and excitement.

With the AAA-North and A-South divisions set to begin this Sunday, the action is only going to increase.

The Southampton Mustangs are joint-leaders in the NBL after winning both games of a double-header against the Essex Arrows last Sunday. The victories put the Mustangs on a 3-1 record, level with the Herts Falcons who earned a split against the Lakenheath Diamondbacks.

The Nottingham Rebels started their AAA-Midlands season off with two victories over the Stourbridge Titans. It was quite a day for the reigning AA Champions as Shannon Henry hit two home runs and Luke Stott swiped six bases. The Rebels immediately gained an advantage in the standings with the other two Midlands teams in action â€“ Birmingham Maple Leafs and Leicester Blue Sox â€“ splitting their double-header.

In the AA-South, the Richmond Dragons roared on Opening Day with two impressive victories over the Kent Mariners, by scores of 13-3 and 18-1. Sidewinders and London Mammoths also got themselves in the win column with victories over the Southampton Mustangs II and Herts Hawks respectively.

Whilst there were contenders from various games, itâ€™s difficult to look past a no-hitter. The AAA-South Bristol Badgersâ€™ Miguel Peralta had a dream of a debut, despite dishing out four walks in the first inning against the London Metros. He settled down from then on and amassed 18 strikeouts over the course of the game, immediately putting a marker down for the rest of the season.

The Metros didnâ€™t let the no-hitter affect them and bounced back in style with a 10-0 victory in the second game of the double-header. The other AAA-South double-header of the day â€“ London Mets II against Cambridge Royals â€“ also ended in a split making the expectations of a close division battle seem entirely appropriate.

The weather on Sunday was relatively kind to baseball In most parts of the country. With Cambridge as a guide, temperatures were much more Spring-like than the Spring Leagues had to contend with a few weeks ago, although an intermittent strong wind ensured that there was no such thing as a â€˜routineâ€™ fly ball. 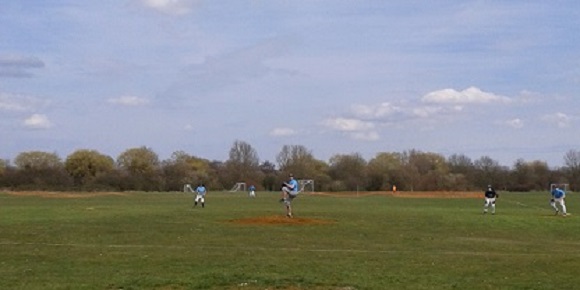 Unfortunately the bad weather from previous weeks left several fields in an unplayable condition. Games between the Richmond Knights and Herts Ravens, and the Daws Hill Spitfires and Guildford Mavericks, had to be postponed alongside the big NBL clash in Harlow between the Nationals and the London Mets.Â  The Nationals are due to host the Herts Falcons this Sunday and weâ€™ll have to wait and see whether the field improves in time for that exciting double-header to go ahead as planned.

Sadly the weather wasnâ€™t the only thing stopping games being played on Sunday. The AA-South has been reduced by two teams as both the Poole Piranhas (an NBC contender last season) and the Essex Redbacks II team withdrew from the competition due to lack of players and resources.

As befits the evolutionary nature of British baseball, as two teams disappear so two new teams enter the fray. The Single-A season begins this coming Sunday with the Haverhill Blackjacks and Milton Keynes Coyotes hoping to make a good first impression on their BBF league debuts.

Meanwhile the playoffs are already on the minds of many in the NBL. A thoughtful article on the Herts Baseball Club website weighs up the pros and cons of the current criteria that means NBL players must have appeared in 45% of the teamâ€™s regular season games to be eligible for the postseason. Whilst the intent behind the rule â€“ in place following a majority vote among NBL clubs in December 2011 â€“ is a sound one, the article raises concerns about the collection of stats to support the requirement, as well as the potential benefits that could be gained by allowing higher-profile players to participate in the marquee event of the British baseball season.

As well as postseason eligibility, we may well see a change to the criteria in regard to participation in the NBL next year. New BBF President Earl Dix has put increasing the sportâ€™s youth programmes at the heart of his agenda and in a recent blog he makes clear that it is his intention to â€œenforce the rule for NBL clubs that they must have a youth programmeâ€. Itâ€™s noted that teams will be given time to achieve this and if in the medium term it produces even more top-tier clubs that are built on strong foundations then thatâ€™s got to be a good thing for the health of the sport.

Call for Papers: This Diamond Isle

We’re gutted that we were unable to field a team in AA South this year as we have got a lot of great friends in the division. However, with the promotion to the NBL we felt we’d be stretched and didn’t want to lose the pathway from developing our junior players and introducing them to senior baseball, so this year we’ll rebuild and hopefully have another team entered in the leagues next season. Matched to our softball programme we are continuing to spread the word of baseball and softball in the region and this small step backwards will be a great leap forwards if everything goes to plan!

See you all on the diamonds for Single-A and in the NBL, guys and girls. And on a softball field near you soon as well!