In baseball, as in other team games, stronger sides generally comprise stronger players, and weaker sides weaker players. All but the very strongest nines ever assembled, though, have had at least one sub-par member, and many poorly performing ensembles have boasted individual stars. This article is about celebrating the latter.The scope is the past 20 years of top-tier British domestic baseball. The data used in the research are reasonably complete, particularly since 2001.

First, we need to establish how we will define individual stars. While countless alternative options are available, including many that are analytically superior, stars will be defined based on leading the stats categories that make up the components of the triple crowns for hitting (batting average, home runs, and runs batted in) and pitching (wins, earned-run average and strike-outs).

Second, we need to decide how poor performance at the team level is going to be determined. We could come up with a scale from 1-100 based on ranking in the final league standings, which would enable comparison between seasons with differing numbers of teams. But this could be badly flawed, as is illustrated by the fact that a second-place finisher can have a losing record and a second-from-bottom team a winning one. Instead, then, we will use winning percentage (used here as the commonly accepted, but admittedly erroneous, term for winning quotient) as a marker of team performance. This is also imperfect, because a player on a bad team in a small league, as compared with a larger league, has fewer competitors to trump in the individual standing. However, it will serve for our purposes here. (One minor clarifying note: if players competed for multiple teams in a given season, the side that they finished the year with is taken.)

Finally, we need to make a cup of tea and run the numbers (actually, I need to make the cup of tea; you will see no evidence of the time gap in writing and can skip right through to the results, if you like). 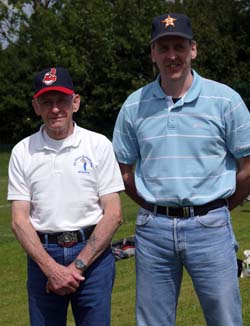 Lee Mayfield (right) with his father Barry (left), taken in 2011 (the height difference is accentuated by the subjects having been standing on a slope). Lee won the batting title in 1995 but his team finished with only a .583 winning percentage.

The first thing to note is that there has not been a batting champion on a team with a losing record in the past 20 years. In 1995, though, Lee Mayfield won the batting title for the 14-10 (.583) Hounslow Rangers. In 2002 and 2003, respectively, Ryan Trask and Ricardo Larrazabal claimed titles for Bracknell teams that played .600 ball.

Perhaps in part because a handful of home runs contributes less to a team’s season than the number of total hits needed for a batting championship, the long-ball title has regularly been claimed by a player on a sub-.500 team. Back in 2010, for instance, Maikel Azcuy won that crown while with the .357 Croydon Pirates. Similarly poor performers were the 1996 Leeds Royals (.389), who Pete Arthur blasted 11 home runs for. But the lowest winning percentage for a team with a home-run king, and indeed any of the individual title categories covered in this article, was .208. The 2008 Bracknell Blazers were 5-and-19 despite Ryan Trask’s seven round-trippers.

In the runs batted in category, only twice has a champion been on a team winning less than three in every five games. Ryan Trask, again, grabbed this crown for the .583 Bracknell Blazers in 2009Â (who were far from poor performers, as they went on to win it all) while Tony Penwarden managed it with the .593 Nottingham Stealers in 1997.

Ian Bates’ 2004 league-leading wins tally is discounted here as his .467 Croydon Pirates still qualified for the play-offs and went on to win the national title. The next lowest regular-season winning percentage for a team with the league-leader in wins is .500. The combination: Darrin Ward and the 2009 Herts Falcons. 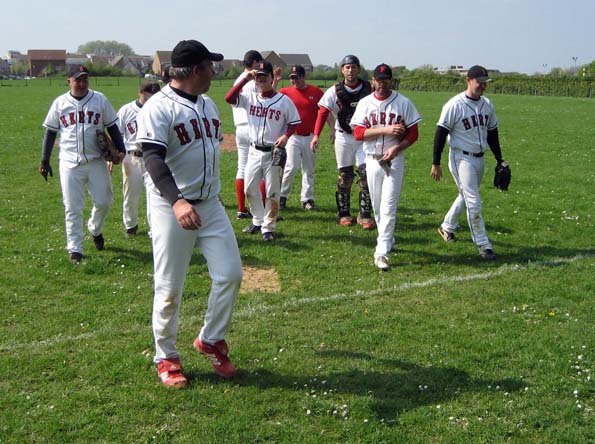 Darrin Ward leads his fielders off the Roundshaw diamond after picking up the Herts Falcons’ first-ever top-tier victory, on 19 April 2009, against a Croydon Pirates team managed by his brother Dave. At the end of the season, Darrin’s six wins tied him for the league lead; his team finished with a .500 record.

On two occasions in the past 20 years has the pitching champion in terms of earned-run average appeared on a sub-.500 team. In 1994, the fireball-throwing Gavin Marshall’s Leeds Royals played .450 ball, while in 1999 the Essex Arrows’ .375 winning percentage came despite Jim Uhrman’s league-best 2.63 earned-run average. 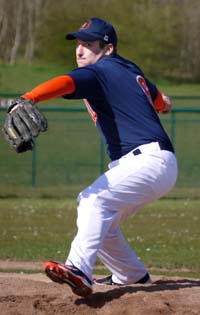 Henry Collins (photographed on 1 April 2012) was the league leader in strike-outs in 2011, but his team finished with a .375 percentage.

Finally, Bracknell Blazer Henry Collins was the 2011 strike-out king, but his team played .375 ball. This was the same winning percentage that the Essex Arrows had recorded 12 years earlier, when Jim Uhrman claimed the strike-out title to go with his earned-run average crown. But the lowest recorded winning percentage by a team with the league leader in strike-outs is .309. This is how Rob Alger’s Lancashire Tigercats fared in 1997.

I doubt if any of these players were truly happy with their seasons, as despite their individual honours, their teams were at best mediocre in the league. Baseball should always be about the team first. On the flip side, their successes may well have shone rays on what might have otherwise been forgettable seasons for the teams and their managers.