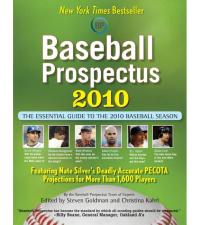 Buying the Baseball Prospectus annual has been a pre-season ritual for me since 2005; however last yearâ€™s disappointing effort left me questioning whether to spend my money on another title. I decided to give BP another chance and Iâ€™m glad that I did as the 2010 is another good book from the team, albeit one with a few imperfections along the way.

The annual is primarily designed to be an aid for fantasy owners, with the central part of the book being BPâ€™s own patented PECOTA projections of how each player is likely to perform in the season ahead.Â  Every team is covered in turn, beginning with an in-depth essay on the organization in question before hitters, pitchers, notable minor leaguers and the manager are looked at under a statistical eye.Â  This is followed by Kevin Goldsteinâ€™s always enlightening section on the 101 best prospects in baseball, but there are no research articles to round off the book as there has been previously. Thatâ€™s not a big blow for me because the articles in the 2009 edition were uninspiring and the Hardball Times Annual is the book to buy if you are looking for that sort of content in any case.Â

The other main difference between the 2010 and 2009 annuals is that this yearâ€™s effort includes an index (and, yes, this was the first thing I checked when I opened up the book).Â  The unintended omission of this essential finding tool last year was inexcusable and perhaps it was a factor in the move to a new publisher for this edition?Â

Beyond missing indexes, Baseball Prospectus has faced some criticism of late. There is plenty of competition out there in the fantasy annual/advanced statistical analysis market and thereâ€™s a suggestion that BPâ€™s position as leaders in the field is based on previous achievements, with their high standards slipping of late.Â

In light of this, some of their self-promoting comments can come across as a little irritating at times (claiming they boast â€œa reputation as a pioneer in statistical researchâ€, referring to themselves as â€œan elite team of analystsâ€ etc), although in writing that I can see itâ€™s probably more a reflection of the reserved Englishman in me (â€˜be modestâ€™, â€˜donâ€™t talk yourself upâ€™ etc) rather than a knock against BP.Â  Still, re-using the same endorsement quotes from Billy Beane, Rob Neyer and Michael Lewis year after year doesnâ€™t exactly counter the idea that they are trading on former glories, particularly when those quotes of praise adorn the outside cover alongside basic errors like spelling the names of Daisuke Matsuzaka and Javier Vazquez incorrectly.

These could be considered minor moans, but the doubts raised over BPâ€™s big bold claim that their PECOTA projections are â€œdeadly accurateâ€ is a more serious line of questioning.Â  Projections can only ever be best guesstimates as numerous factors (injuries and personal problems to name two obvious ones) can derail them on an individual basis.Â  With that accepted, you would expect â€œdeadly accurateâ€ projections to beat other competing systems and at least one study of the 2009 projections has PECOTA comparing poorly to the rest.Â  The launch of the online 2010 versions has not gone smoothly either.

These (potential) faults may affect some people, but they are not a major concern to me.Â  I donâ€™t really use the annual as a fantasy tool as I take a more relaxed approach to fantasy baseball than many (i.e. pick a few Â ranking lists to refer to, draft as I see things on the day, spin a trade or two and see how they pan out).Â  Itâ€™s fun to look at the projections, but I donâ€™t rely on them to help me make roster decisions.Â  The reason I buy the annual is because it provides a wealth of up-to-date info about over 1,600 players.Â

Most importantly, it combines the stats with objective, â€˜scoutingâ€™ commentary that provides even more detail and puts the stats into context.Â  When I look up Astros pitcher Wandy Rodriguez, I can see a wide variety of stats from his last three seasons (including BP proprietary stats like VORP) and then read about how he has improved via greater reliance on his curveball, better control and improved pitch sequencing.Â  I can trace a finger over Mark Teixeiraâ€™s numbers and then read about his glove work and unorthodox swing.Â  I can look at the bare bones of Jair Jurrjensâ€™ performances and then read about his pitching repertoire (slightly-above average fastball, very good changeup, plus a solid slider introduced in 2009) and his consistency.

In short, when Iâ€™m listening or watching a game via MLB.com, I can pluck this hefty book off the shelf and learn more about the hitter stepping up to the plate, or the reliever coming in from the bullpen, or the impressive prospect in Double-A that the commentators are referring to, without needing to go to several different websites or to try and interpret the stats completely on my own. From the start of Spring Training right through to the World Series, Iâ€™ll be reaching for this annual on a regular basis, expanding my knowledge of the players and increasing my enjoyment of the game in the process.Â

No doubt Iâ€™ll come across a few errors that annoy me (like the incorrect spelling of names mentioned above) and personally I could do without some of the self-aggrandisement, but I thought the same about the 2009 edition and I still looked up something/someone in it on an almost daily basis last season.Â

I bought the annual again this year because I wouldnâ€™t want to be without it and thatâ€™s a decent recommendation for any annual/reference tool.

Have you read â€œBaseball Prospectus 2010â€? Feel free to share your thoughts in the comments section below. Can you recommend any other similar books? If so, let us know.

Web pick of the week: Josh Chetwynd on Planet Hardball

I think a lot of the value from the Prospectus comes in the team essays at the start of each team’s section. These give a really good insight into exactly what each team should be doing (but probably isn’t) to build their team for the future.

With regards to PECOTA, in addition to the evidence that its not as good as other systems (e.g. CHONE), there’s the fact that there have been some well-documented revisions of their pre-season predictions due to mistakes in their spreadsheets. I don’t think this is particularly likely to fill anyone with much confidence, although I’m supposing these have been ironed out before publication of the book.

Hi. That’s a very good point about the team essays. I was reading something elsewhere about the Rockies earlier today and that had me scuttling back to BP’10 to read their essay on the team and how they have moved away from trying to build a ‘Mile High’ winner to simply building a winner. Lots of good points to ponder.