In the third inning of Richmond’s opening-day trip to Croydon last Sunday, Ron Almonte,Â the home team’s shortstop, watched the fourth pitch of his at-bat sail through the strike-zone and was called out looking. The deliverer of the pitch was Cody Cain, and Almonte had just become the hurler’s 500th strike-out victim in regular-season British baseball. 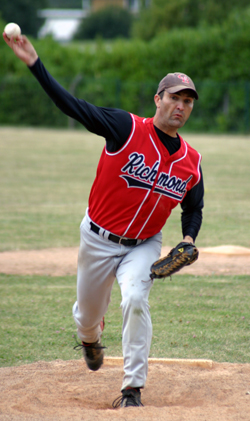 There was a further milestone for Cain in the game. In his final plate appearance, he was hit by a pitch with the bases loaded to collect his 200th regular-seasonÂ RBI. This neatly highlights the spectacular two-way contribution he has made to the British game.

The only setback for Cain in the game was conceding a run in the first frame and another in the second, which saw his streak of 21 consecutive scoreless innings up to the end of last season come to an abrupt end.

After a disappointing finish to the 2009 season, in which Cain was unable to gain Richmond a win over Bracknell in the deciding contest of the top-tier National Baseball Championship (see right), it is great for British baseball to see him return to the mound in 2010.

League leaders and full season statistics, which include a game-by-game breakdown of batting and pitching figures, can be found on the Great Britain Baseball Scorers AssociationÂ (GBBSA)Â website.

Sunday’s early MLB games: Will the Padres be on cloud nine?

That’s a great achievement, both for Cody and for all the people who’ve collected the stats over the years so that his feats can be recognised.

[…] Milestones Staying with Cain, he brought up another milestone last Sunday by claiming his 40th win in British top-tier baseball (including four in each of his two seasons in the breakaway league in 1993 and 1994). This goes with his 500 strike-outs and 200 runs batted in milestones he succesfully reached on opening day. […]