The 2010 National Baseball League (NBL) season should see teams playing the most games since 2005; its 28-game schedule pits all competitors against each other in home and away double-headers. So with teams having played between eight and 12 games at this stage, the season is still in its early stages. Nevertheless it is worth having a run down of how the category leaders for the various statistics are currentlyÂ looking. In addition, it’s a good time to have a recap on some of the statistical highlights accomplished in recent weeks in the 2010 NBL season.

Alberto Casciello, the London Mets’ new second baseman, is proving to be the toughest out in the NBL, with his .800 on-base average leading the league. His .667 batting average (10 hits from 15 at-bats) is also an NBL-best figure. However, it’s Yoshi Saito of the Richmond Flames who has the most walks thus far, having drawn 10 to Casciello’s nine. 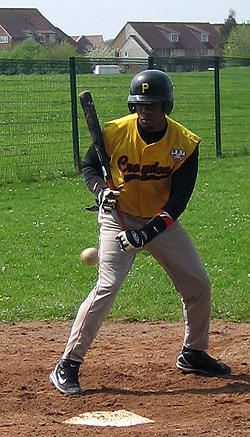 Among the power hitters, it is Maikel Azcuy of the Croydon Pirates (pictured to the right) who is currently at the top of the list. Azcuy has accumulated the most home runs to date (four) and also possesses the highest slugging average, with a clean 1.000 (this is despite having a huge hit voided after an appeal play at first base against the Southampton Mustangs resulted in a home run being wiped off his record, a fate he also suffered last season, although the appeal was at home plate that time).

Richmond’sÂ Robbie Unsell, who was last season’s base-stealing champion, is top of the pile again this year. He has 13 so far and is yet to be thrown out by a catcher, although he was caught stealing last Sunday after a smart move from the Essex Arrows’ pitcher Richard Chesterton saw him put out in a protracted run-down play.

Pitching
The Mets’ Jason Roberts has six wins from six starts and has a real chance to break the modern top-tier record for victories in a season. The current record is 10, held jointly by Ian Bates (Croydon Pirates, 2004) and Cody Cain (London Warriors, 1995). We will be keeping a close eye on this as the season develops. Roberts also has the most strike-outs and innings pitched. But his team-mate Bryan Anderson has the best earned-run average (0.86), while the Flames’ Cody Cain leads in both WHIP (0.75) and strike-outs per nine innings (12.9).

Milestones
Staying with Cain, he brought up another milestone last Sunday by claiming his 40th win in British top-tier baseball (including four in each of his two seasons in the breakaway league in 1993 and 1994). This goes with his 500 strike-outs and 200 runs batted in milestones he succesfully reached on opening day.

Feats
Firstly, Matt Maitland of the Bracknell Blazers hit a grand slam against the Herts Falcons on 16 May, which was his second bases-loaded homer in the space of just 3 weeks. Secondly, Azcuy’s four home runs mentioned above included two in one game against the Mildenhall Bulldogs on 16 May. Finally, Derrick Cook, another new player on the London Mets’ roster, managed hits in nine straight at-bats earlier this season.

League leaders and full season statistics, which include a game-by-game breakdown of batting and pitching figures, can be found on the Great Britain Baseball Scorers AssociationÂ (GBBSA)Â website.

Great round-up Joe. Good to see a Pirate gets in there, although by the looks of it Maikel’s not had much luck in recent times. Cracking photo as well.

Well done Alberto! (he trained with the Maple Leafs and Blue Sox in the off season before joining the Mets)